March 6-21
Days 115-130
We arrived at Little Harbor after a very nice crossing from Spanish Wells.  This harbor provides a well protected anchorage, and more importantly, Pete's Pub.  You know you are in the islands when you can go out for the evening and leave your shoes on the boat.  There is just something special about sitting outside on a beautiful evening, enjoying a good meal, great friends, and some island drinks, while burying your toes in the sand. We also were entertained by the many sea turtles that call this area home.  On Sunday morning we headed out of the harbor intending to head north towards Snake Cay.  We only got as far as Lynyard Cay (maybe 2 miles away) when we found Blue Angel and Priorities.  They had crossed with us from the states over to Bimini, but had gone to the Berries instead of the Exumas.  Of course we anchored so that we could share our Bahama's stories and enjoy a pot luck on the beach.  We added some new friends by including the couples off of two sailboats that came in to anchor later in the day.  Between pot luck on Sunday, docktails on Monday, lots of swimming, snorkeling, lobstering, and shelling, we all had a great time.  Our next stop was the marina in Marsh Harbor.  We were in need of water, a laundromat, and some provisioning.  Marsh Harbor boasts a fairly nice grocery store by Bahamian standards, so we stocked up on some necessities.  While in Marsh Harbor we heard that Barefoot Man (the island's answer to Jimmy Buffet) was performing at Nippers on Great Guana Cay, so it was time to cast off for the short trip over to Fisher's Bay, where we dropped anchor with about 60 other boats.  Talk about a party!  Cruisers from all over the Abacos converged on this very "colorful" bar for an afternoon of fun.  Sadly, we left our friends on Ta Ta the next morning.  We were ready to get on with our looping and as they will finish theirs in June, they wanted to spend a few more weeks in the Bahamas.  We hope to meet up with them again somewhere in our travels.  Jess and I continued island hoping on our way up the Abacos in preparation for our crossing back to the good ole U.S.A. 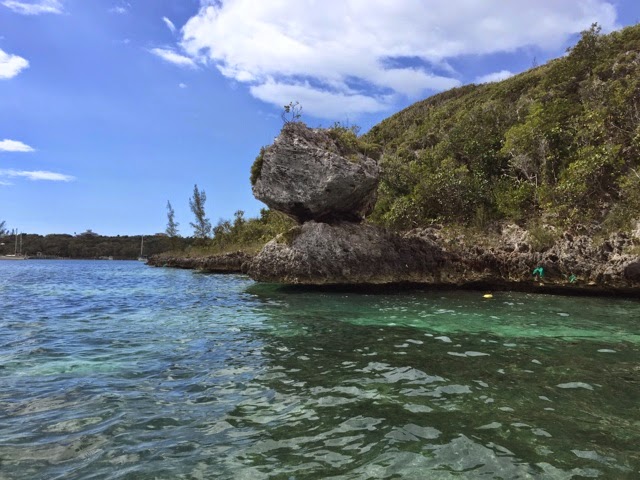 Everyone seems to be trying their hand at balancing rocks.  Nature is doing a pretty good job at the entrance to Little Harbor. 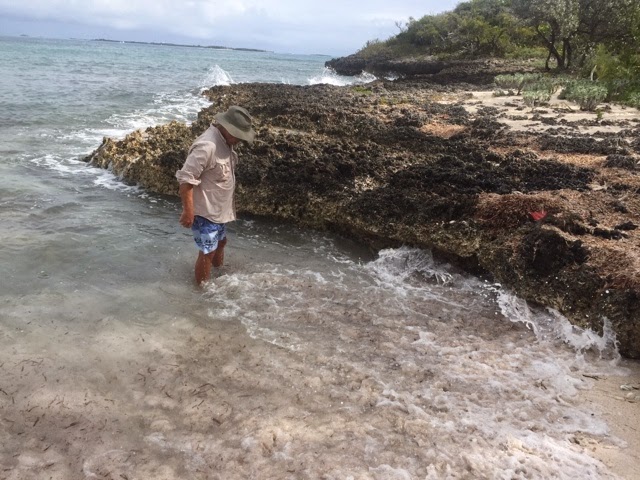 Jess has really started taking his job of searching for shells seriously!  We have accumulated quite a few as mementos from our trip. 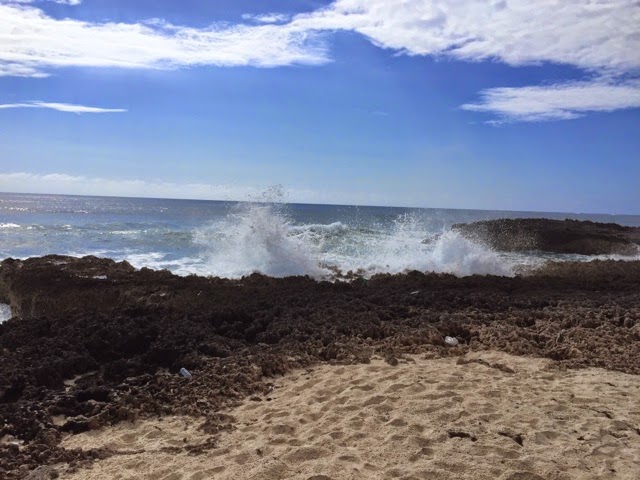 The seas on the ocean side of Little Harbor were sending up some pretty good spray, as they collided with the rocky coastline.  There is pretty much two types of terrain in the Bahamas; very harsh rocks or sandy beaches. 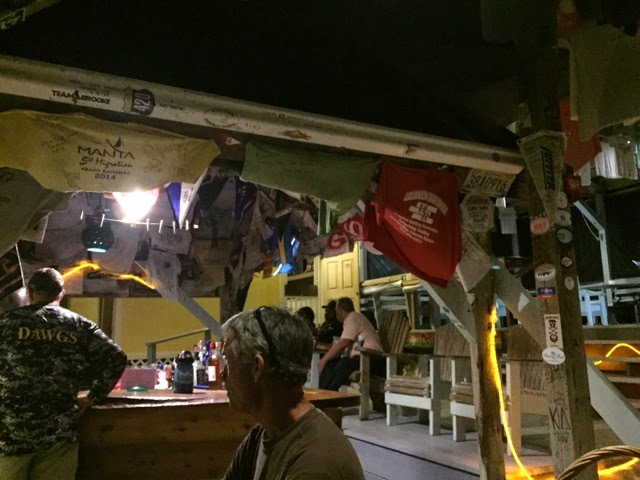 Pete's Pub is quite famous in these parts.  People from all over the world add banners, t-shirts, signs, or anything else they can come up with that lets everyone know they were here.  Other than a gallery for the beautiful bronze work that Pete produces, there is not a whole lot else here. 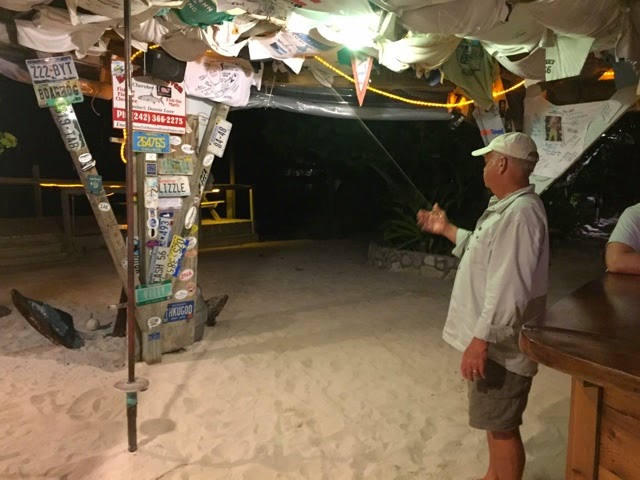 We all tried our hand at the ring game we have found in various places throughout the Bahamas.  Can't say if this is played in the U.S. or not, but we had never run across it before.  The whole thing consists of a hook in a tree or post and a ring attached to a cord.  The object  is to swing the ring in such a way that it stays on the hook.  Not as easy as it sounds! 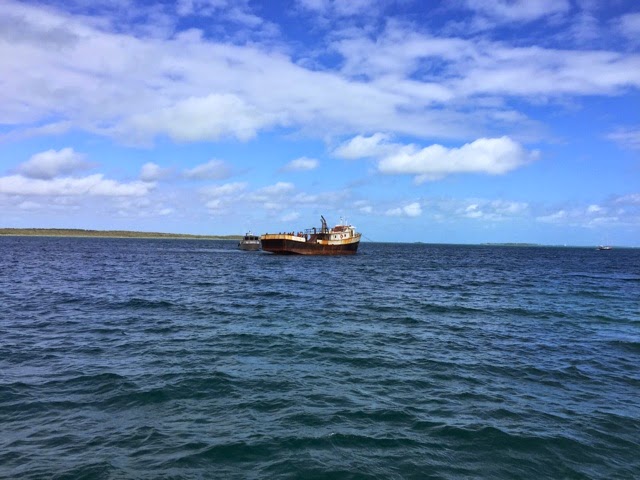 This guy was not having a good day.  Evidently he either can't read his charts or doesn't have any. The local authorities were not too happy about the old barge getting stuck on the reef. 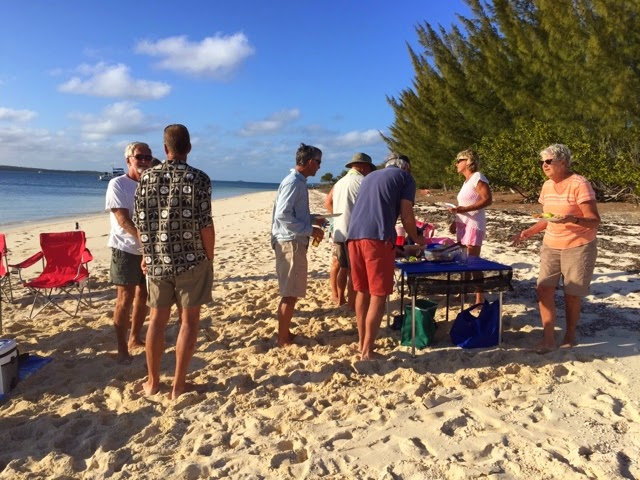 Good food and great friends on the beach!  What better way to spend an evening? 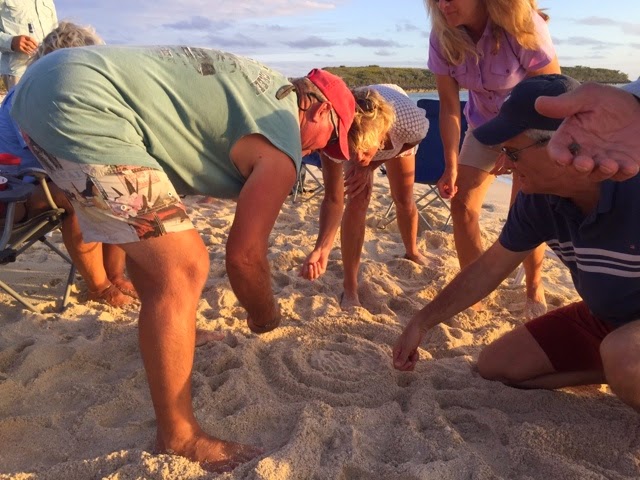 Get a group together and someone has to come up with a way to have some friendly competition.  It is really amazing how fast some hermit crabs can move. 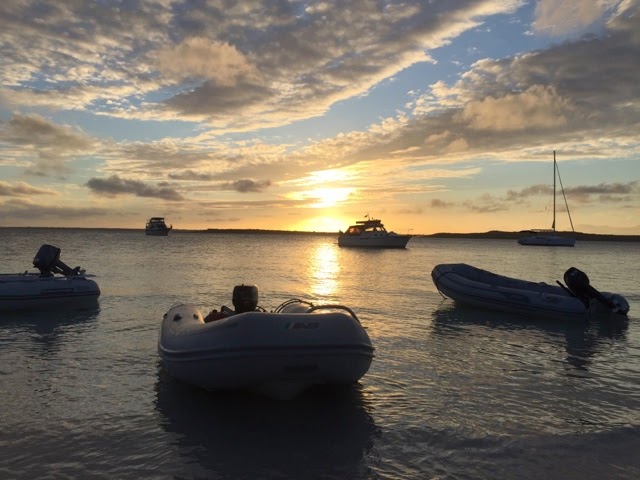 Another wonderful day in the islands comes to a close.

Rain was a very rare occurrence.  Some places would get a pretty good downpour, while a mile away only got drops.  We woke up to a spattering of rain that left us with a beautiful rainbow.  Unfortunately it was already starting to fade by the time I got a picture. 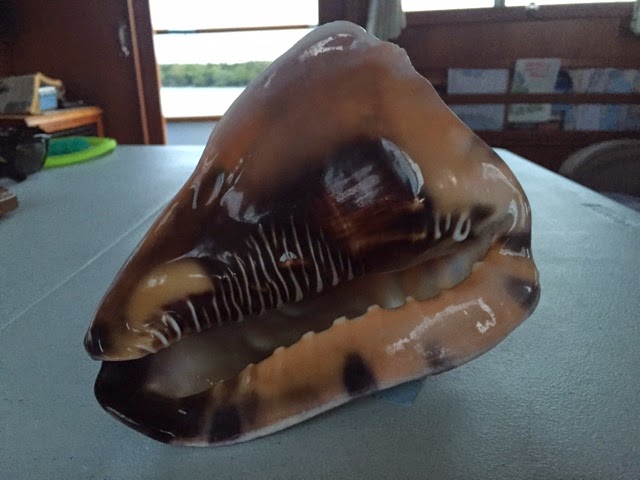 This shell is called a king helmet. Jess and I had seen one at a gift shop in Spanish Wells. Of course it wouldn't be right to just purchase one, so I challenged my loving husband to find one for me.  Should have known he would come through! 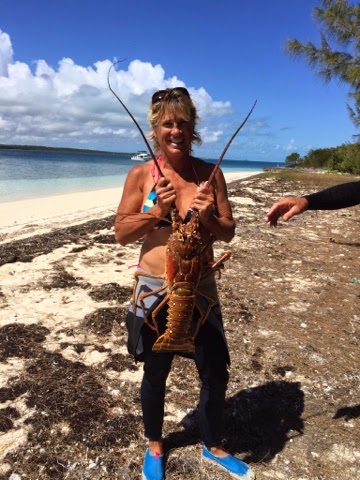 While snorkeling in a nearby blue hole, Kathi and her husband caught this guy.  He came in at 8.5 pounds. These two have been coming here during the winter for years. They say that the water provides them with their supper at least 6 days out of 7.  If Jess and I tried this we would starve. 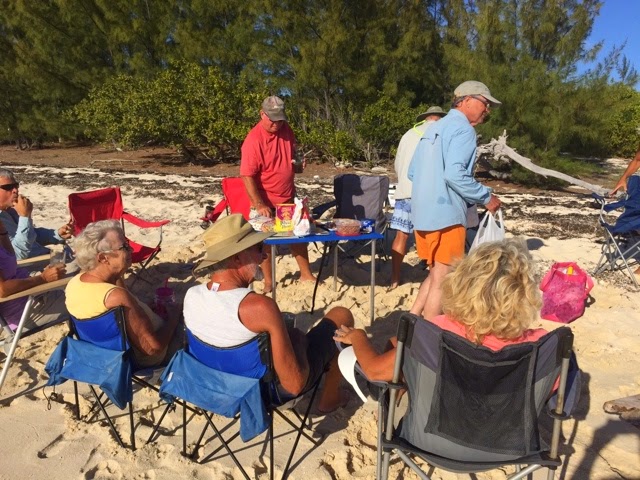 Tonight it is docktails (even though we are on the beach).  For you landlubbers out there, that means snacks and byob. 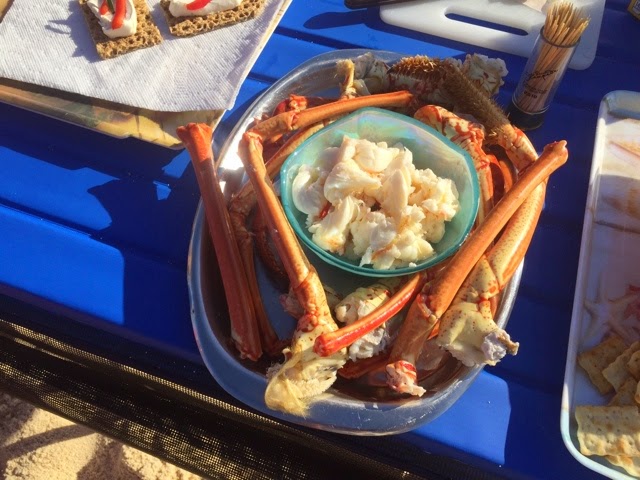 Normally the legs on rock lobsters are too small to eat.  Kathi was nice enough to share the legs off of the huge fella they had caught earlier in the day.  They were fantastic! 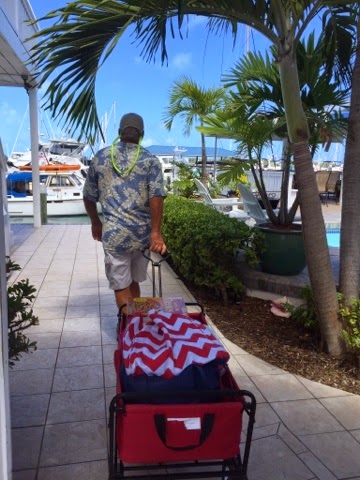 When traveling by boat is your mode of transportation, there are just a few choices for getting around on dry land.  Many boaters carry bikes to get around when they are ashore, so far we are using our legs.  Our wagon has made getting back to the boat with groceries a whole lot less stressful. 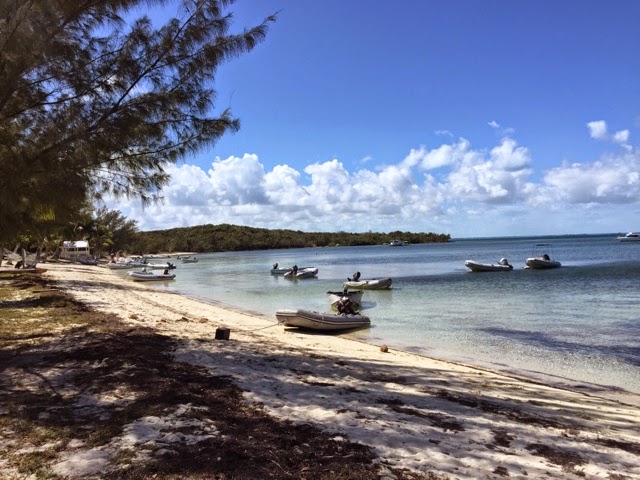 The day of the big concert has arrived.  The dinghies (our Bahamian automobiles) are headed for the beach.  With over 60 boats anchored in the harbor this place will fill up fast! 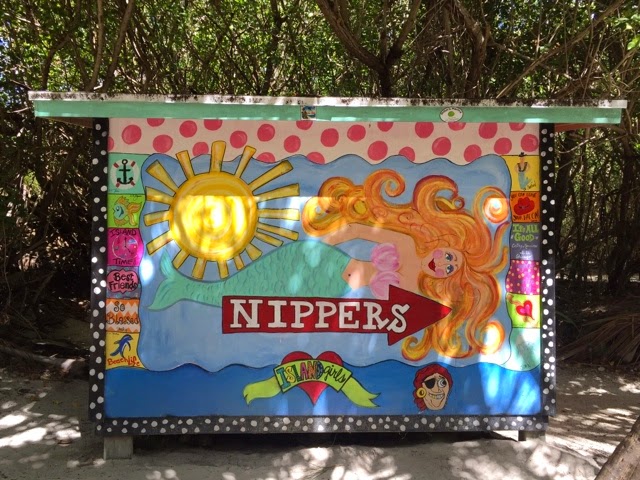 After spending an hour walking around Great Guana Cay, Jess and I have come to the conclusion that Nippers is pretty much why visitors come here.  It is definitely a happening place! 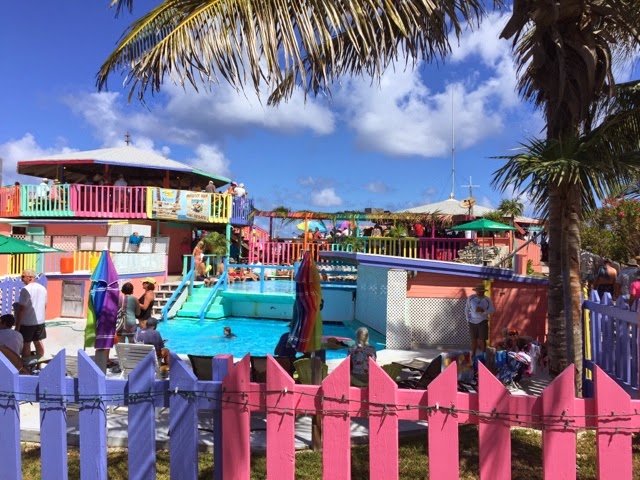 If you can imagine throwing up a bunch of fences, a few platforms here and there, picnic tables, some awnings, and several cans of Oops paint from Lowes, you may come close to what Nippers is like.
The main thing is that everybody has a great time at Nippers and I would have loved to have gotten a commission off of the t-shirt sales. 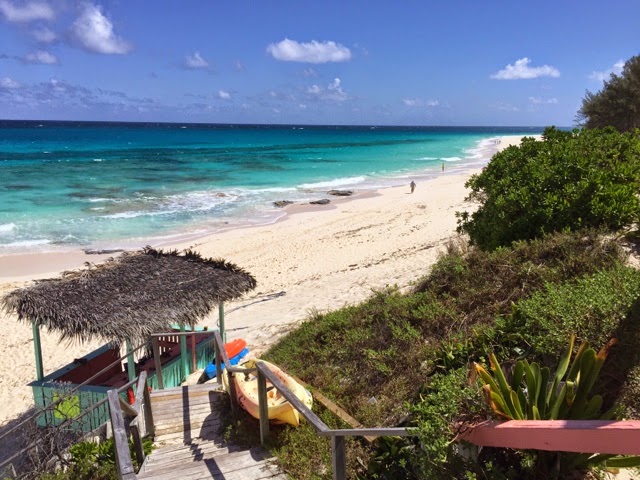 If the pool doesn't suit your fancy, it is just a short walk down the stairs to a nice sandy beach. 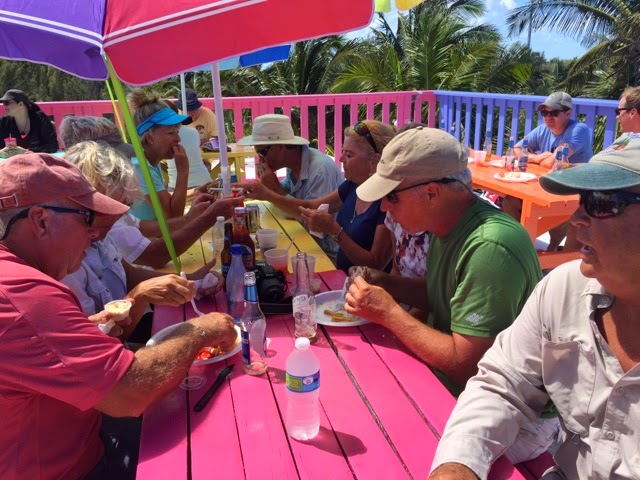 Our gang took up residence upstairs for the afternoon.  The food was good, the music was interesting, and there was plenty to drink. What a fun day! 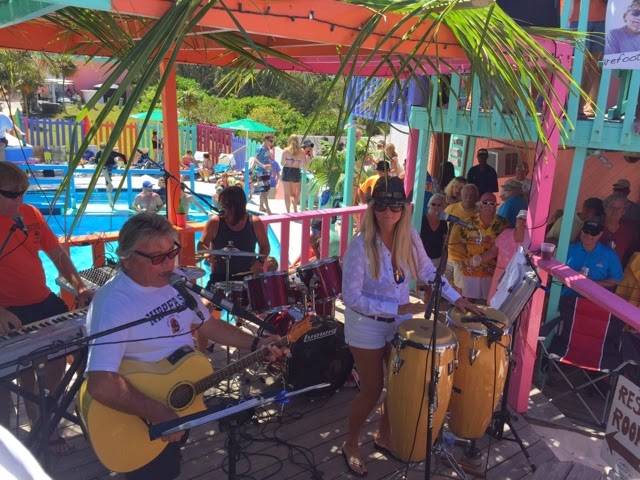 This is Barefoot Man with his band.  He does mostly his own songs (sometimes it is best not to listen too closely to the lyrics), and is really quite entertaining. 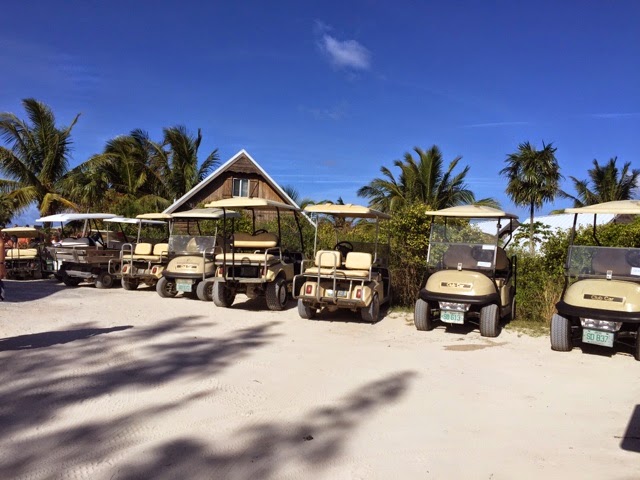 For those who don't walk from the other side of the island, this is what the parking lot looks like at Nippers. 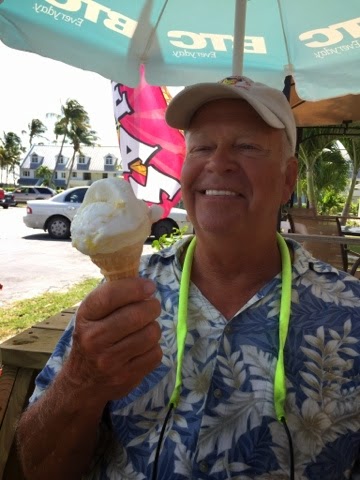 We found at least two great things at Treasure Cay.  The ice cream parlor and one of the most beautiful beaches we have ever walked on. 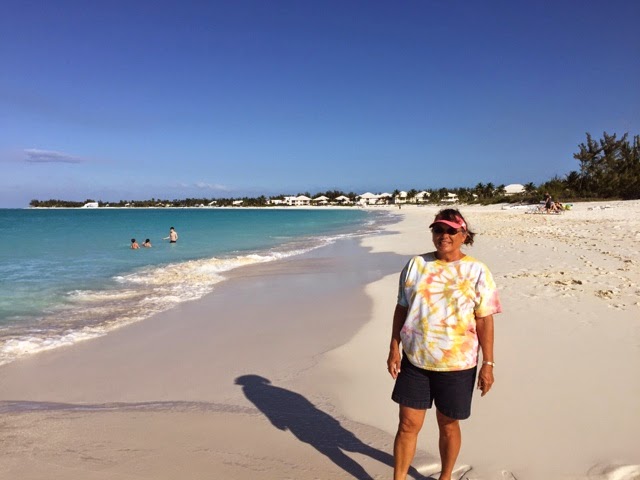 The sand here was perfect.  Very fine, white sand that felt wonderful during our nice long walk.  Just one problem, no shells. 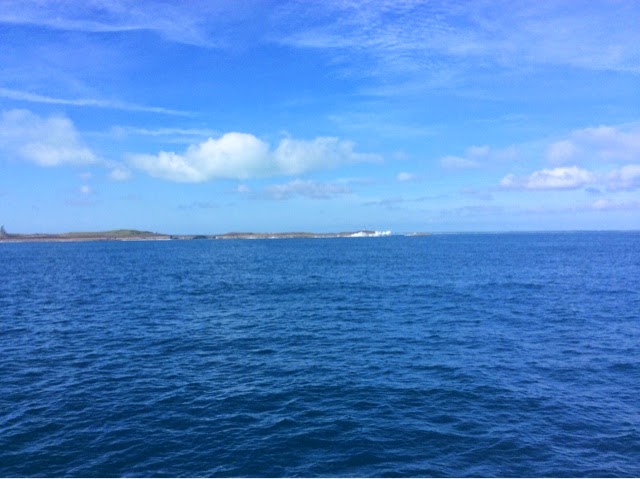 For us Sunday was a day we had been dreading since before coming to the Bahamas.  It was time to cross The Whale.  We had heard nightmare stories about how dangerous this area can be, so we planned our timing for what we hoped would be a safe trip around Whale Cay.  The weather turned out to be just what we had expected, and the waves and current proved to be on our side. Another time that what we have stressed over turned out to be no big deal. Thank goodness! 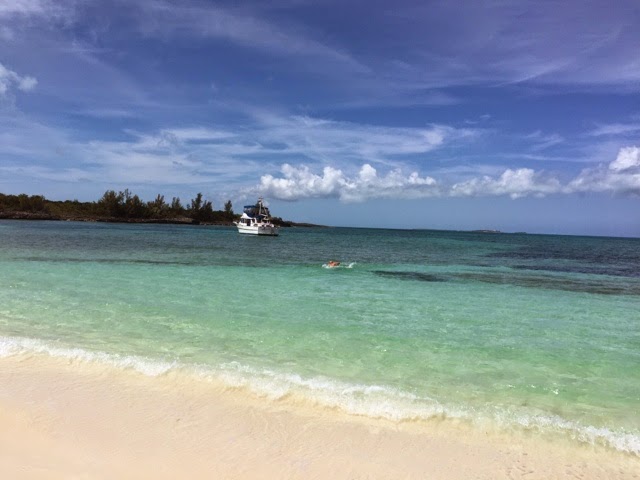 Our little anchorage in Manjack Cay started out to be one of the nicest places we had visited.  The beaches were great, there were some great places to swim, snorkel and beachcomb.  Then the worst happened, tour boats from Green Turtle Cay puilled in with tourists that came to feed stingrays and sharks. Great!  They become so used to being fed by people that as soon as you step into the surf here they come.  Maybe I am not as brave as the next guy, but swimming with stingrays and sharks is just not my cup of tea.  Jess did find me a few nice shells while the sharks were occupied elsewhere. 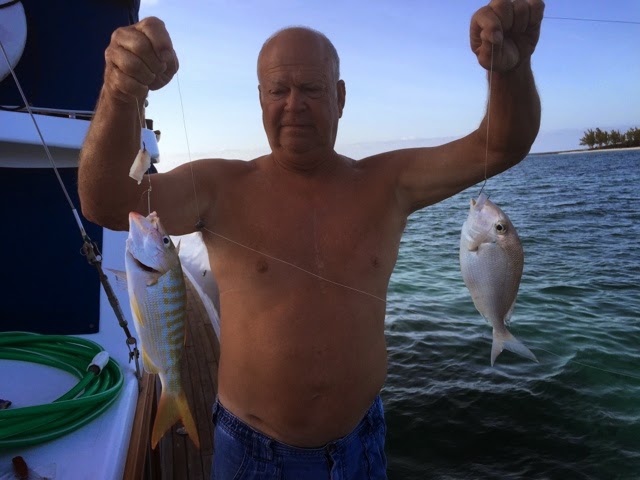 We did have some fun catching a few fish from the boat.  These guys managed to get hooked at the same time, so we both had a fish to deal with.  By the way Jess is holding the one I caught in his right hand.  Remember I am the one with the camera, so he gets to hold the fish for us both.  We usually have no idea what kind of fish we have caught, so back in the water they go with our thanks for providing us with a few moments of excitement. 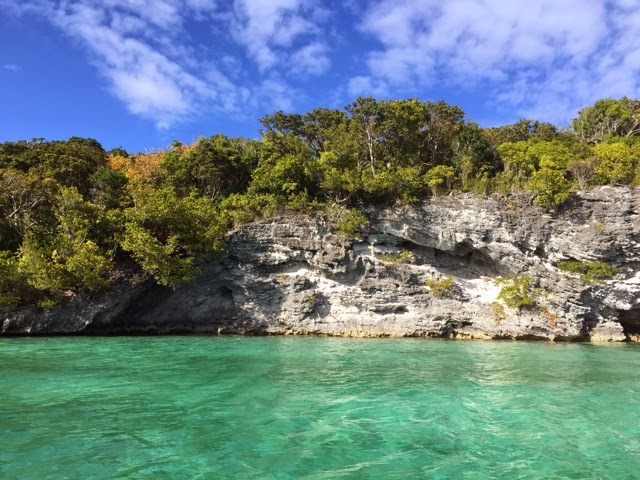 One of our last stops before heading west.  Allen's Cay is a very nice anchorage, with nice beaches and incredibly clear water. 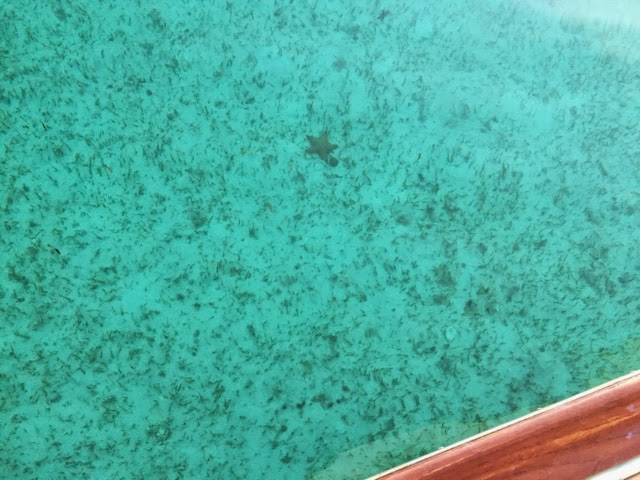 Jess and I have had an amazing time cruising around the Bahamas!  Sometimes we would look at each other and say "I can't believe we are really doing this".  We have visited many of the islands, but there are many more that we have missed.  Maybe next winter! 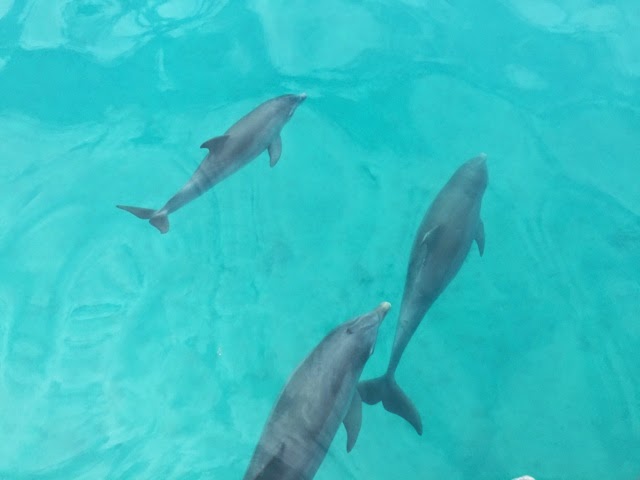 Dolphin sightings have been few in the Bahamas.  It is almost like these guys came to tell us goodbye, for now!
Posted by Linda and Jesse at 9:33 PM