June 14-21
Days 215-222
As we have continued our travels up the Hudson River, we have been rewarded with some of the most beautiful scenery you can imagine. This area that flows through the Catskills and the Adirondack Mountains of New York, before reaching the stunning views of Vermont, in general has been a very pleasant cruise. When we left the lock at Troy, it was time for us to make a major decision as to which route we would take at this point in our Loop. Until now, other than the side trips we had taken, the Great Circle route was pretty much straight forward with very few options. Now we were literally coming to a fork in the road as it were. Do we take the left fork through the Erie Canal and then on into Canada or do we keep to our right and go up the Champlain Canal into Lake Champlain and then on into Canada? After much discussion, we decided that we would take the longer route through Lake Champlain because heaven forbid we should bypass the locks in the Rideau Canal. Actually, we have had so many fellow Loopers tell us that we will love the Rideau that we just can't pass up this part of our trip in order to save a little time. Besides, this adventure is as much about what we experience along the way, as it is about just crossing our wake when we finish. After experiencing some strong winds and rough seas in Lake Champlain, we are now attached to a mooring ball in the harbor at Burlington, VT. and the weather is absolutely perfect. We will stay here for a couple of days while we enjoy this lovely town and Jess gets the oil changed in our engines, then it is off to Canada. While we are in Canada we will basically be off the grid again, so unless I find a wifi every now and then this will be the last post until we return to the U.S. 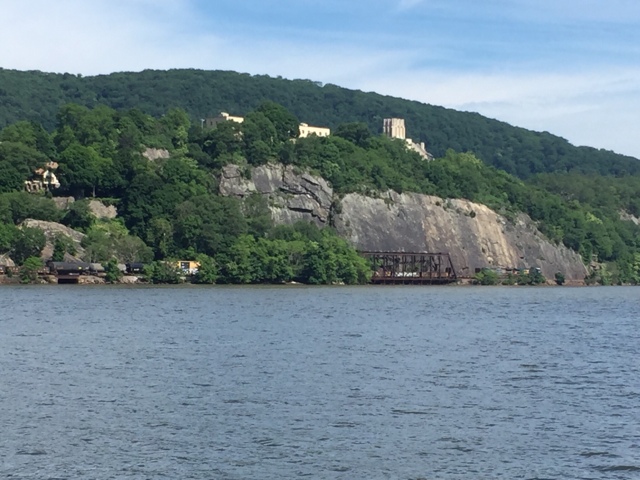 Much of the scenery along the Hudson reminded us of our own Tennessee River. There are beautiful cliffs and lush wooded areas along the banks. One huge difference is that this is the middle of June with highs in the 60s and low 70s, while I am sure it is much warmer in North Alabama right now. 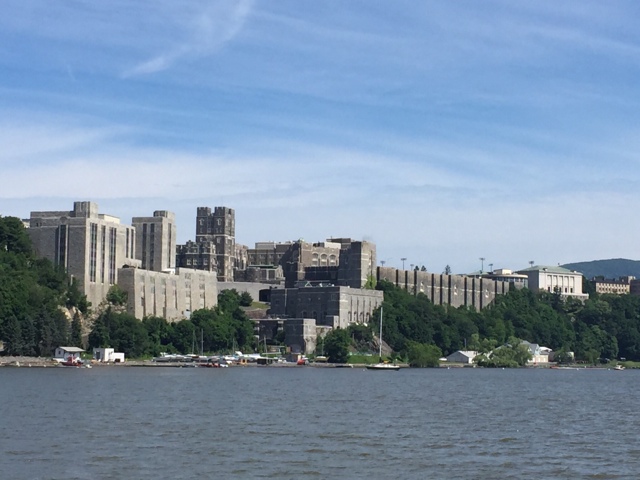 It is amazing sometimes how different our view from the water can be. When we visited West Point by car I did not realize that there were so many large buildings all the way down to the banks of the river. Obviously our tour only touched on the vastness of this stunning campus. 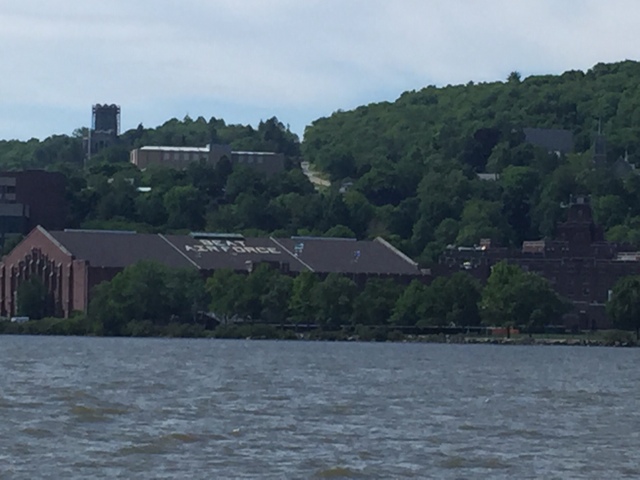 Hopefully you can read the sign on the roof. When we took our tour it was pointed out to us several times how important to the cadets this is. Beat Navy was also on the list of important events. 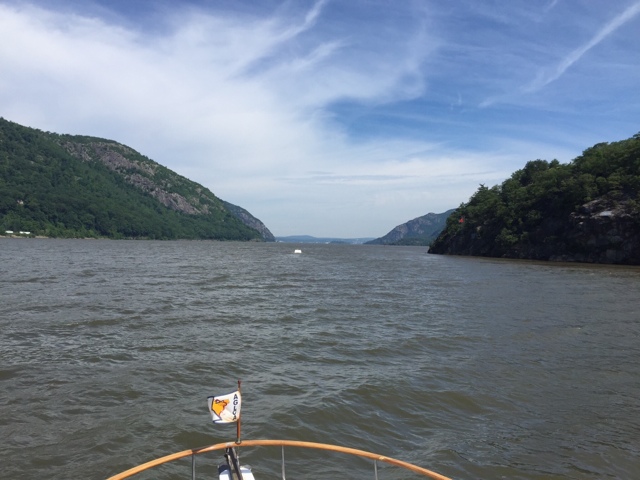 This is the narrow channel above the fort at West Point that the Revolutionary forces pulled a chain across so that British ships could not proceed down river. 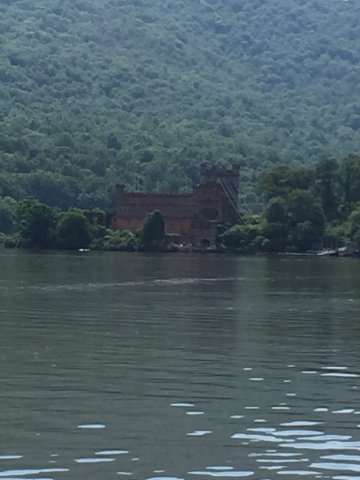 The ruins of Banneman's Castle. This island castle has long been abandoned by its owner who was using it as an arsenal housing explosives, ammunition and Civil War relics. It was actually a warehouse for one of the first Army-Navy stores in NYC. You just never know what you might find along the river. 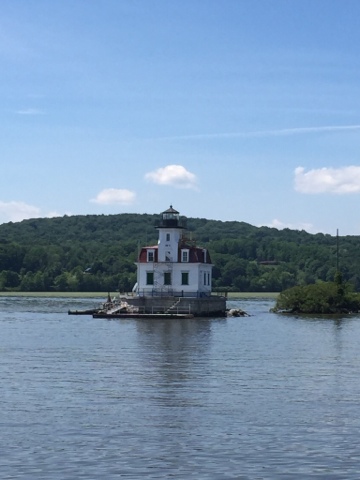 Modern technology seems to have made the lighthouses here either obsolete or unnecessary, as none of them appeared to be inhabited. 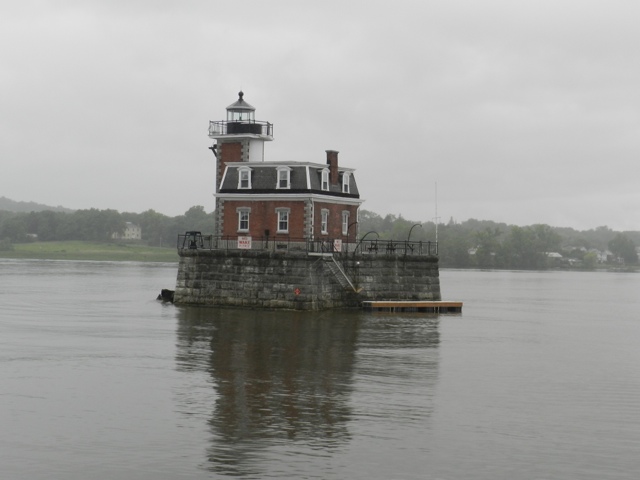 Apparently the lighthouses in the Hudson were built with the comfort of the keepers in mind, more so than the ones in the Chesapeake were. 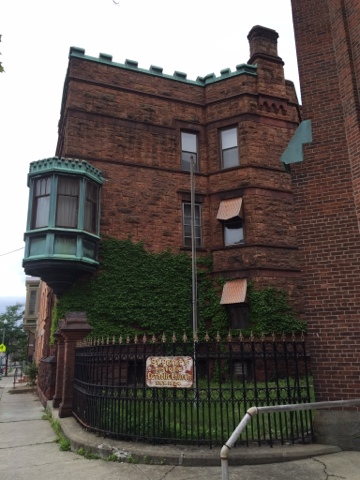 We spent one night at the free dock in the older part of the city of Troy. Many of the businesses in this area have closed down and it is a shame to see so many of the old buildings in need of repair. The cost of upkeep must be astronomical though. This beautiful Catholic Church was built in1824, unfortunately many of the windows are boarded up. 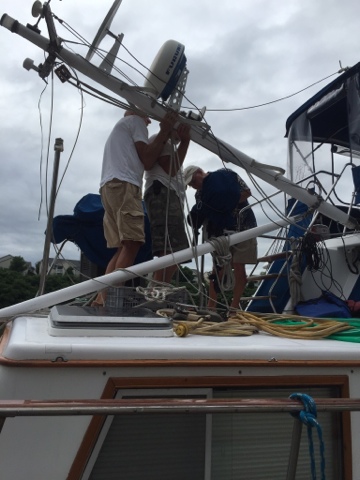 Upon entering the Champlain Canal system there are some fixed bridges that are too low for us to get under with our mast up. With the help of some fellow loopers it is no problem for Jess to get it down and in the cradlle. Of course at some point we have to get it back up into its proper position again. Jess says it will be a breeze, we will see about that. 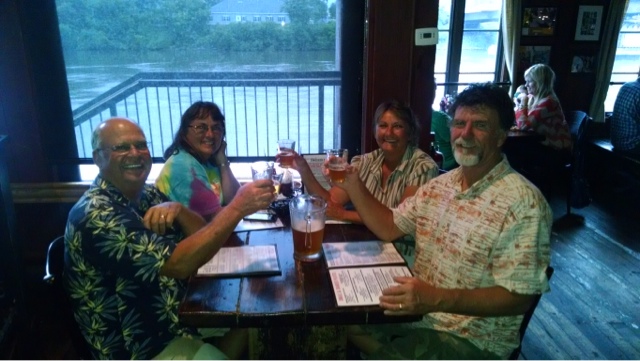 A stop in Troy gives us an opportunity to share a meal at Dinosaur Bar-B-Que with Ralph and Janet Babish on Gud-Nuff. They are taking the same route into Canada that we have chosen, so we will be enjoying their company for awhile. They are from Hayden, Co., a small town near Craig where we lived in 1975. 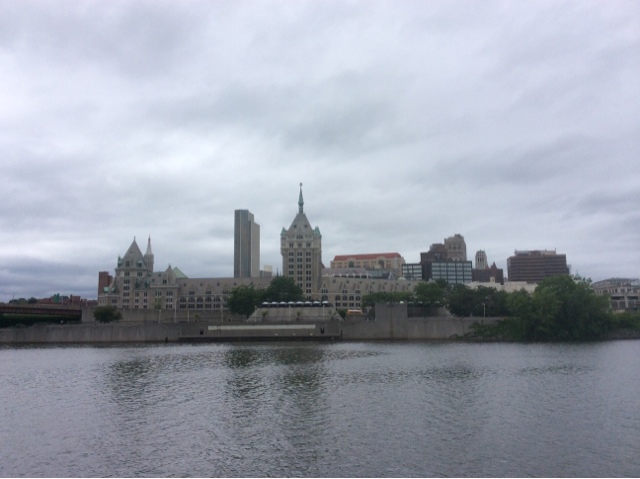 New York's capitol city, Albany, as we cruised by the waterfront. With threatening rain we chose not to make a stop here on our way to the Champlain Canal. 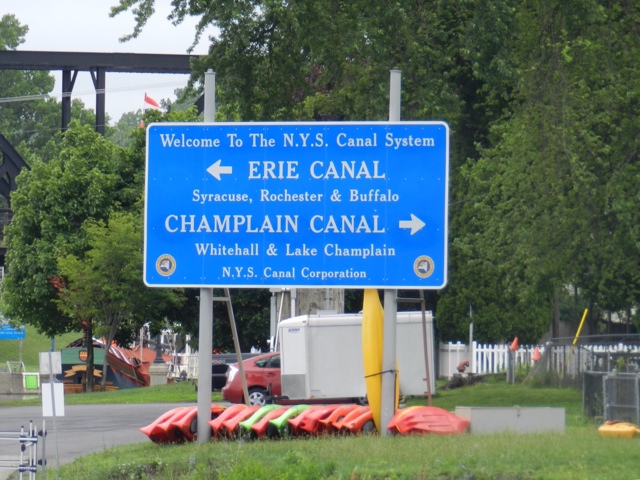 The fork in the road. Thank goodness we have decided on the Champlain, because we have heard since we went by the Erie that because of high water it has been temporarily closed, stranding many boaters between locks. 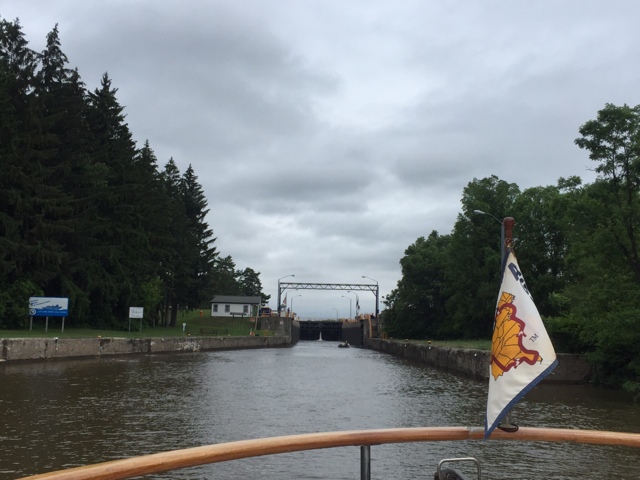 The Champlain Canal consists of 11 locks. Eight going up and 3 going down into Lake Champlain. The locks are actually numbered 1-12 with no number 10. When the engineers first laid out the canal the plan included 12 locks, but they discovered when the building of the canal began that lock number 10 was unnecessary so they left it out. So they didn't have to redo all of the plans, they did not renumber the last 2 locks. This makes sense to everyone except the person that searches their charts extensively for lock number 10. Yes, that would be me. 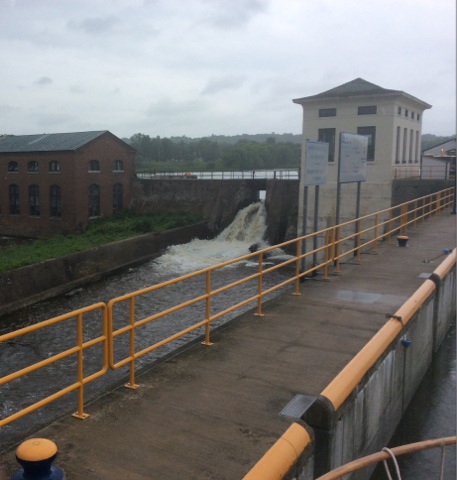 Finally got Jess to take a picture from the upper helm while I am below with the lines. This is the spillway at one of the locks that actually produces power. 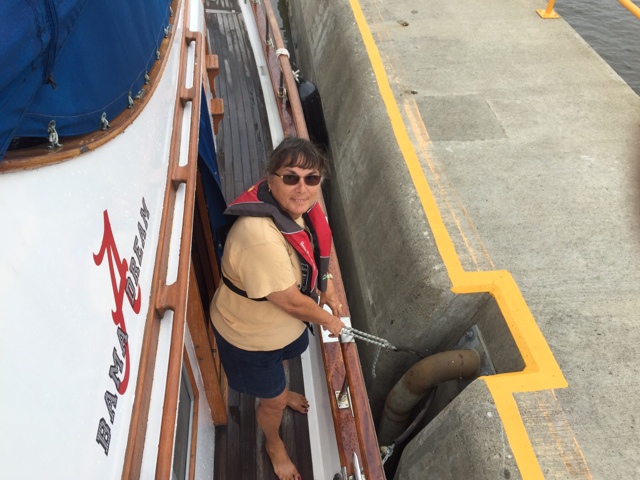 Looks like I have unleashed a monster. Jess has discovered that I am not the only one who should be documenting this journey. 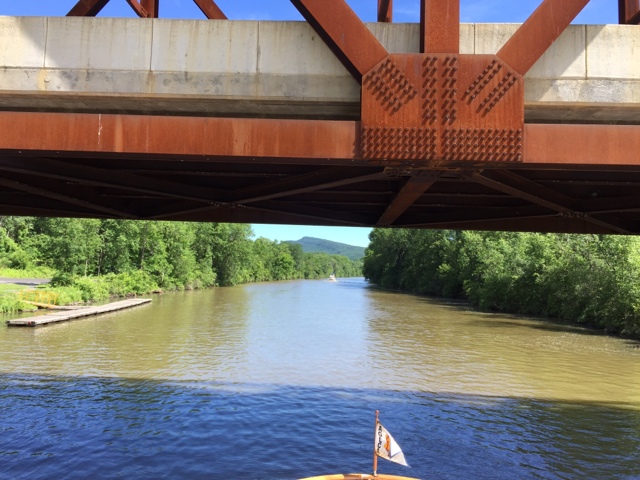 This gives you an idea of why we had to lower our mast. Fortunately, we can get low enough to traverse this section of the loop. Many boats are not able to get under these fixed bridges, so they have to cruise the Erie Canal. 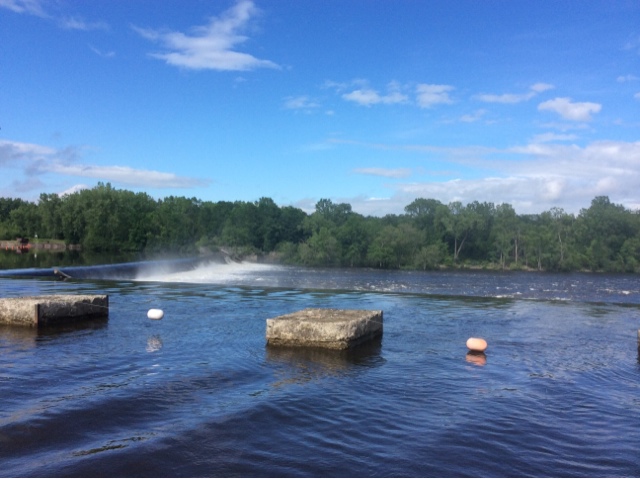 One of the dams along the canal system. Compared to the locks on the Tennessee River and the Tenn-Tom, these are not very deep. Most of them are only about 15 ft. up or down. 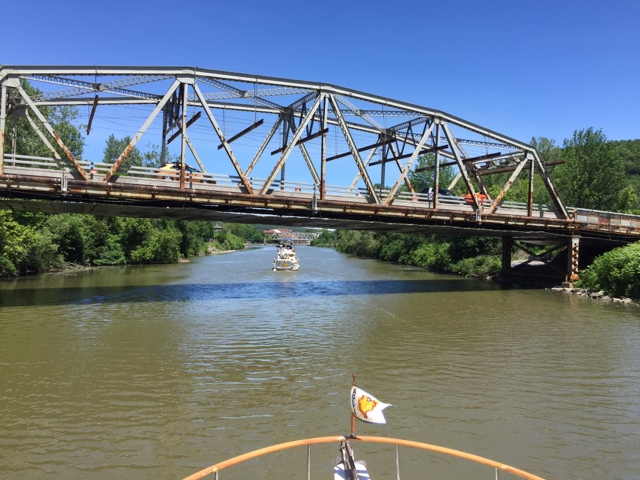 The heavy rains have caused the water to be a little muddy, but this is still a beautiful ride. 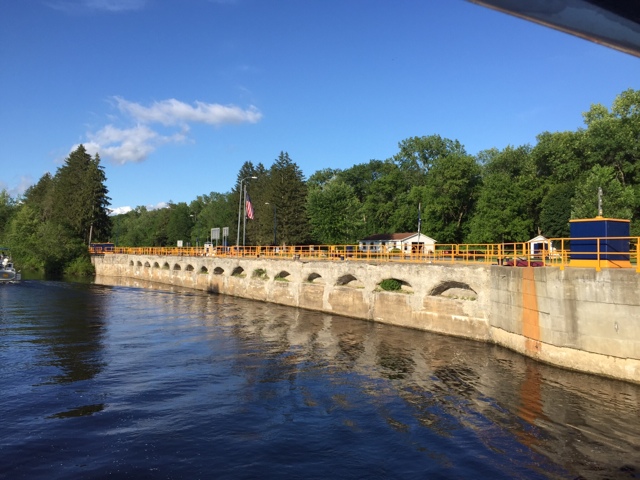 The outside wall of Lock number 7. We snuck by here on our way to a free dock at the historic town of Fort. Edward. The locks are only open until 6:00 p.m., so you have to spend at least one night along the way. Jess and I enjoyed a short walk around town and a nice supper in the Old Fort Restaurant. 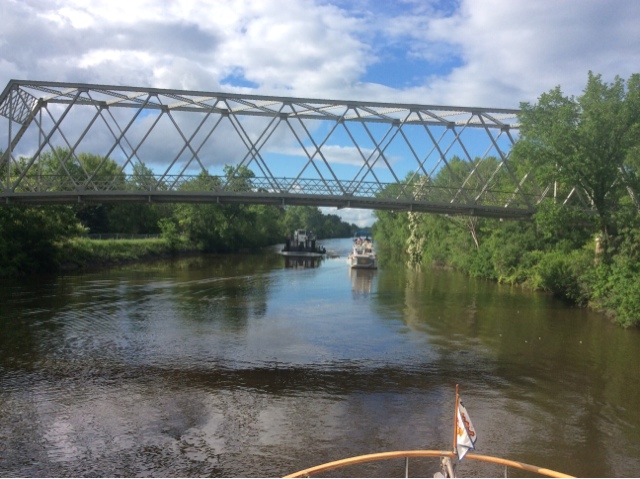 There is a large dredging project going on through the canal, so we had to maneuver around many work boats as we made our way north. 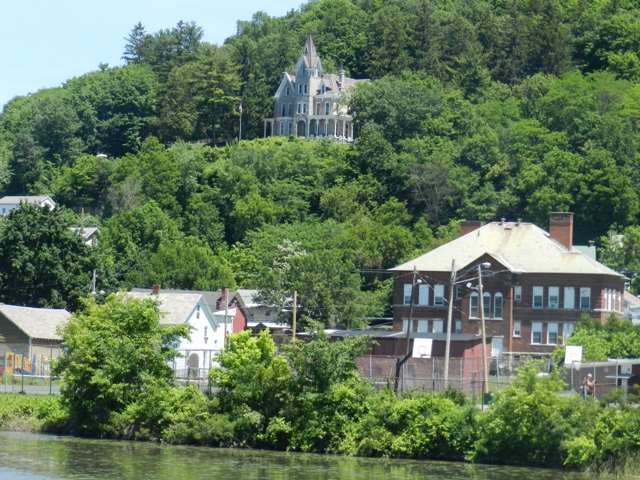 At the north end of the canal is the village of Whitehall. This is just one of the many of the lovely towns along the riverbank. 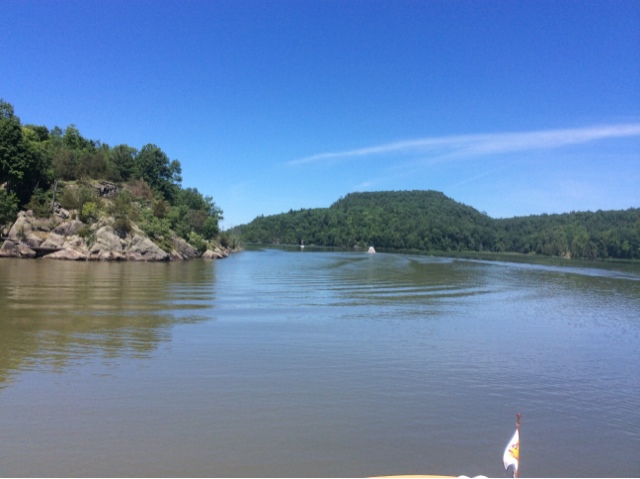 A gorgeous view of the cliffs and mountains before the river opens out into Lake Champlain. 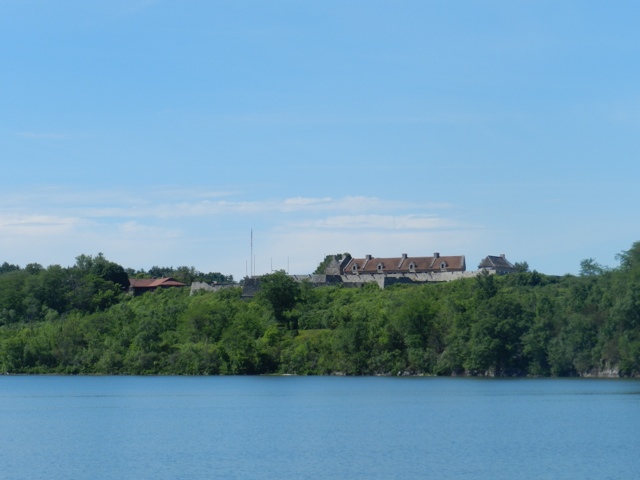 Fort Ticonderoga was the site of several battles during the French and Indian War, as well as, the Revolutionary War. Before Benedict Arnold turned traitor he led a group of Green Mountain Boys that were successful in taking the fort from the British in May of 1775. Commanding this fort kept the British from moving down the Hudson until 1777 when British cannon from Mount Defiance placed Fort Ticonderoga back into British hands. 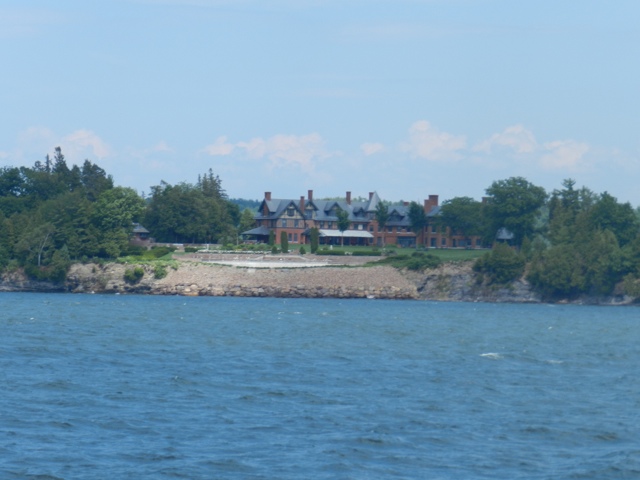 This majestic old inn has been restored and is now a resort and restaurant. It is supposedly so popular that reservations are required in advance. We haven't figured out how that can be done when we never know when we will arrive in any given place. 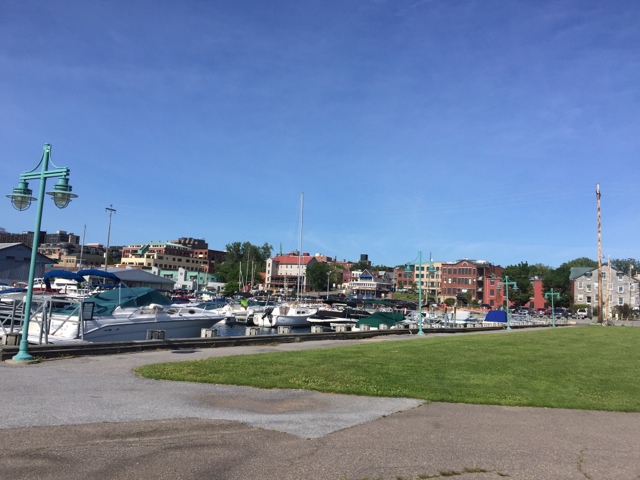 The waterfront of Burlington, VT is full of life.  There are a couple of small marinas and a harbor crowded with moorings. All positioned behind a breaker wall that helps minimize the wave action coming off Lake Champlain.  Ferries and tour boats come and go taking people back and forth across the lake. This is a beautiful old college town with lots to see and do. 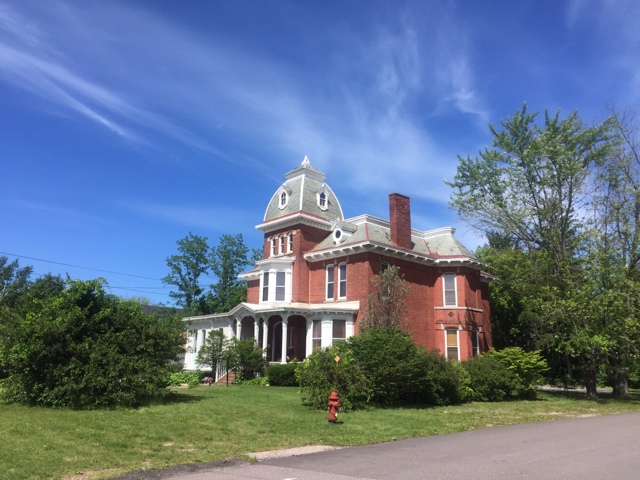 Historical homes, many of which have been turned into businesses, can be found on virtually every street. 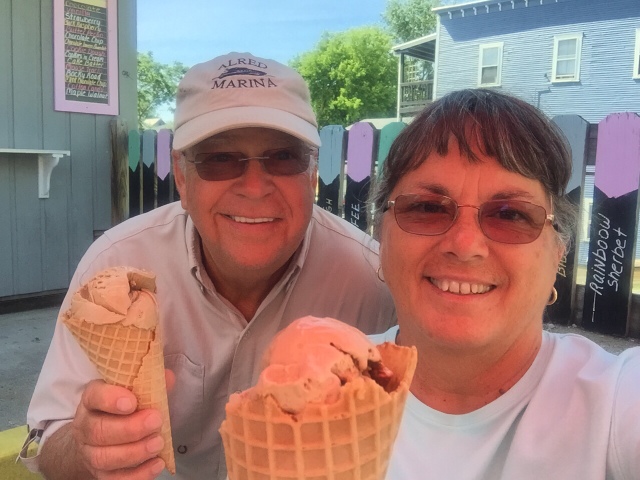 O.K., I have to admit that finding ice cream stops has become very important to me. I think next time we take one of these selfies I am going to make Jess be in front, because my ice cream sure looks a lot bigger than his! 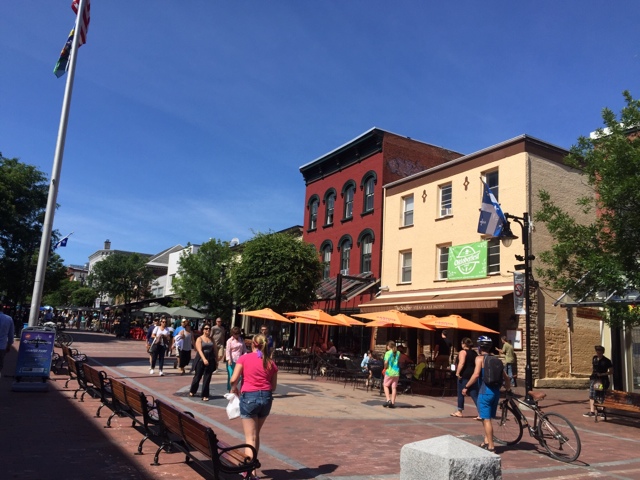 The Church Street Marketplace is a happening place on the weekends and during the summer tourist season. The street is strictly for pedestrian traffic and is lined with numerous shops and restaurants. 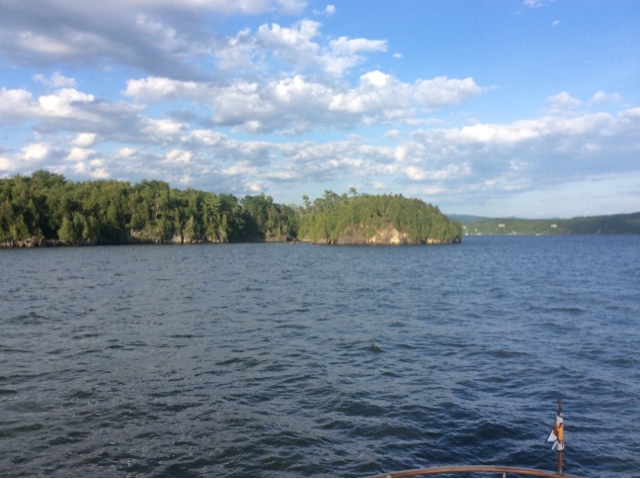 We are on the move again. Anchoring in this picturesque cove as we begin our trip north into Canada.
Posted by Linda and Jesse at 5:26 PM