August 15-17
Days 277-279
Have I mentioned before that I am not exactly thrilled with open water passages? I much prefer having something other than just water to look at on those days that we need to cover the miles. Now, remember our top speed is about 8.5 mph, so when I say "cover the miles" I am only talking about 50-60 miles. Our goal was to anchor one last time in Canada so that we would be close to Drummond Island where we would check in with U.S. Customs first thing Sunday morning. That meant for a long travel day on Saturday plus another long day of open water after we left Drummond Island. Other than giving up two dozen eggs and a couple of lemons to the Customs agent, we are glad to be back on our own turf. Especially since we are now able to turn our phones back on. Neither Jess nor I are big on long phone conversations, but we sure were happy to be back in touch with family and friends. After our short stop at Drummond Island we were off again with Mackinac Island as our target. The water was absolutely gorgeous until about 1:00 when the wind and waves picked up considerably. By the time we reached the harbor at Mackinac Island about 4:00, we were both ready to tie off our lines and go for a walk on something that wasn't constantly in motion. What a unique place Mackinac Island is! With only a few exceptions (lawn mowers, fire truck, ambulance, and a few work vehicles), the only means of transportation allowed on the island are horses, bikes, or walking. A constant flow of ferries bring thousands of visitors to the island every day. Many come just for a day, but others take advantage of the many historic Inns in order to extend their stay. The island has been a favorite vacation spot for the average family, as well as, the rich and famous for centuries. We spent a couple of days here enjoying all of the sights, smells (there are lots of horses), and some great food. While Mackinac Island is famous for their fudge, we didn't indulge. Jess still has fond memories of the fudge his sisters made for him when he was a kid, and nothing else stacks up. I guess I will have to get the recipe. 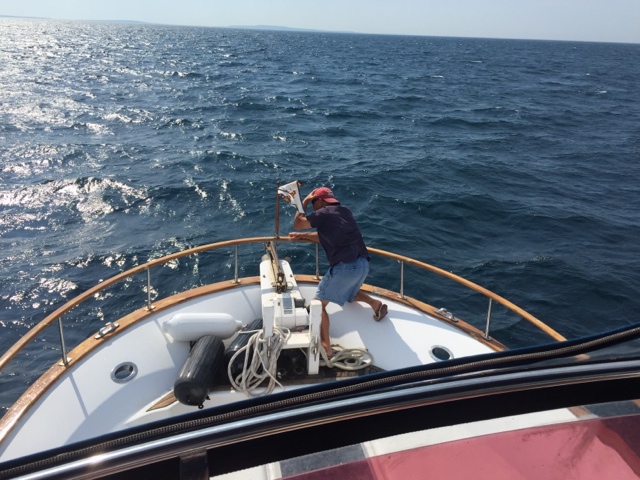 With the wind trying its best to send his cap flying, Jess valiantly rescues our burgee. Luckily only one of the wire ties broke before he was able to reattach it to the pole. We have been looping long enough, that we can almost tell how long other loopers we meet have been traveling, just by the condition of their burgee. 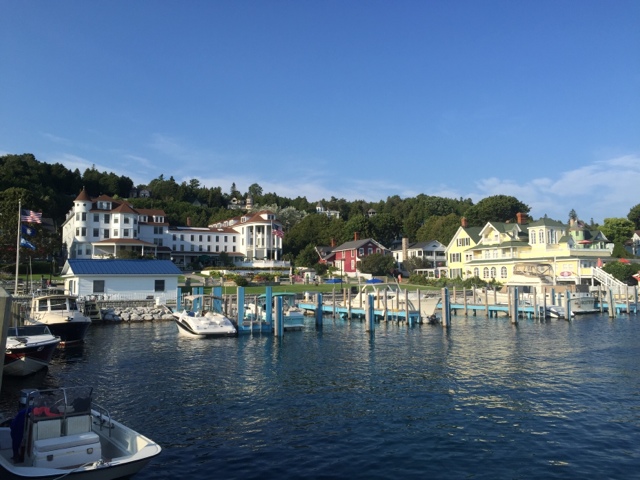 Luck was definitely on our side when we managed to get two nights in the marina on Mackinac Island. It is very difficult to time where we will be when, in order to make reservations in marinas ahead of time. Mackinac Island is a very popular spot, and with only one marina and no good anchorage places, we would have had to stay on the mainland and ferry over with the crowds each day. It is so much nicer to be able to just walk off our boat when we are ready. 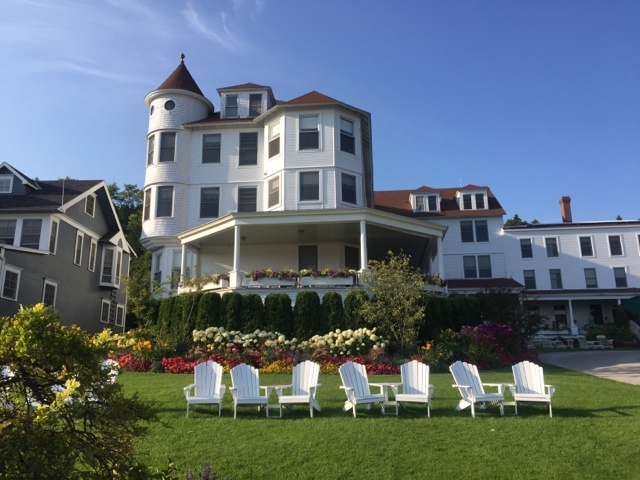 The Inns and homes along the waterfront are reminiscent of a bygone era. With their wide porches and lush green lawns, they encourage guests to relax, after a fun day of investigating all of the wonderful things the island has to offer. 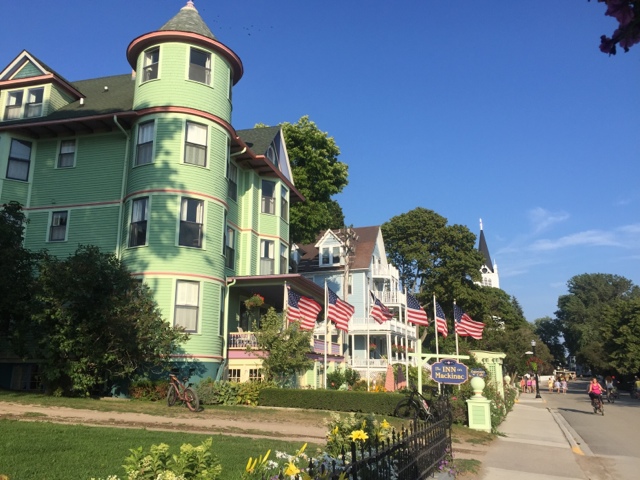 The streets are lined with brightly colored Inns and many historic homes that are now Bed & Breakfasts. 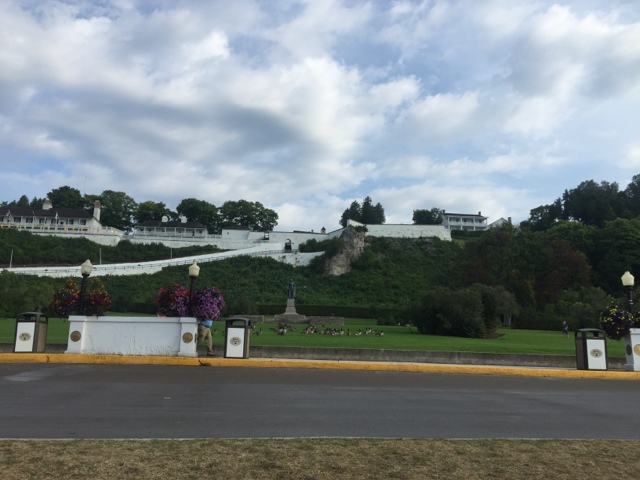 Fort Mackinac was built by the British in 1780-81. Thirteen years after the end of the Revolutionary War the island was finally returned to the Americans. On the eve of the war of 1812 it was again seized by the British in their attempt to control military movements in the area. It wasn't until the end of the war that the island was returned to the U.S. 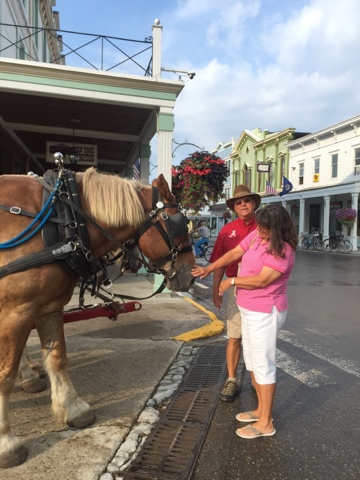 I couldn't resist rubbing this guys silky nose, as he patiently waited to have cargo unloaded. While many of the horses are used to transport tourists, there is an equal number that spend their day delivering supplies to the many establishments on Mackinac. 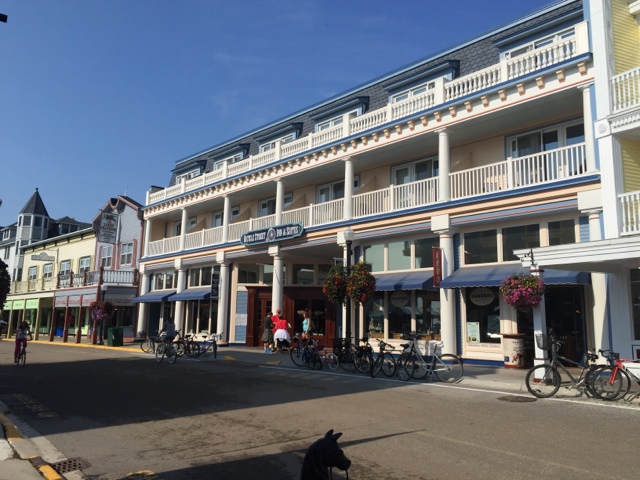 Huron Street provides an abundance of shopping, restaurants, hotels, and of course, the famous Mackinac Island fudge shops. Many of the tourists arriving on the ferries never make it past this street 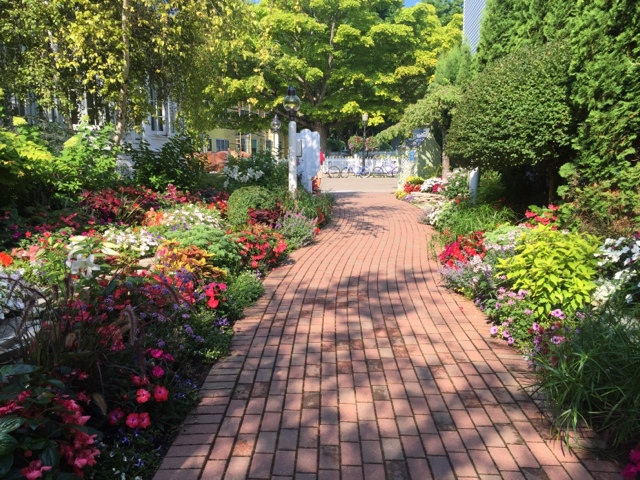 A stunning array of flowers provide a feast for the eye along every walkway. 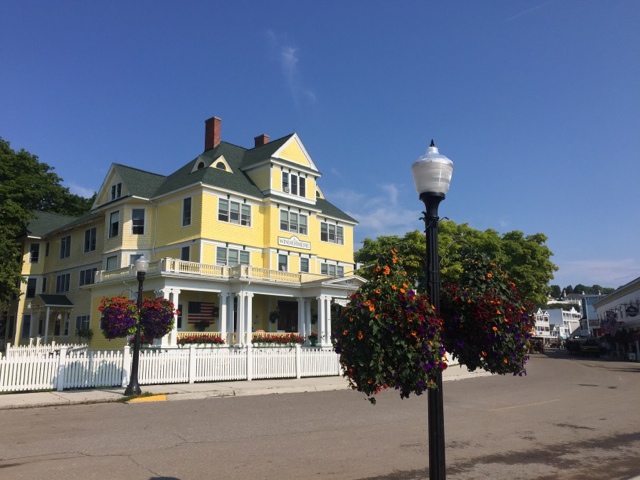 Many of the large, immaculate structures date back to some of the earliest summer residents. The more affluent often spent their summers in places like Mackinac Island in the early 1900's. 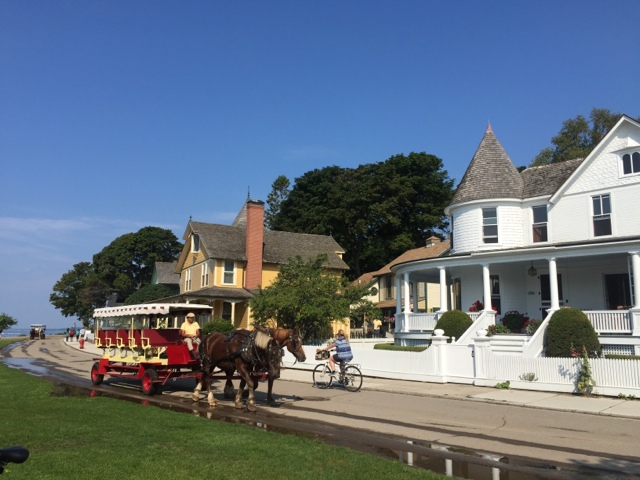 One of the many horse drawn carriages makes its way down Huron Street, on its way to take another group of visitors on a tour of the island. 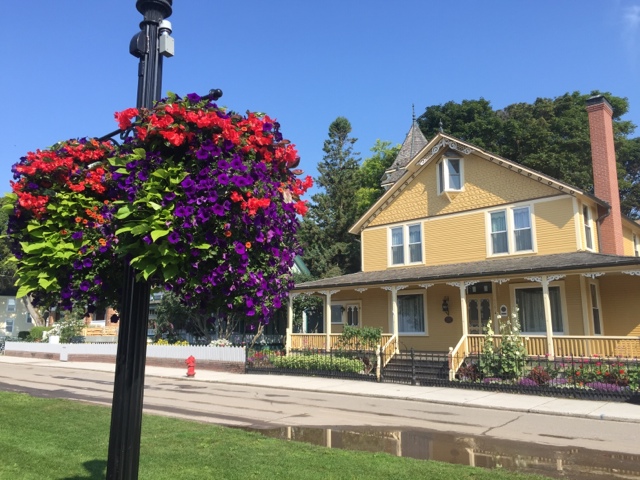 Just keeping the hanging baskets adorning every lamppost watered must be a full time job for someone. There are only about 400 year round residents, but from May-October those numbers swell with all of the seasonal employees. 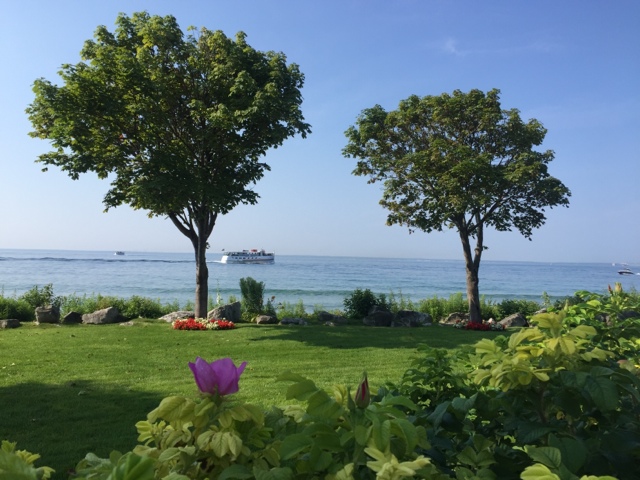 One of the numerous ferries that ply these waters, makes its way back to Mackinac City to bring another load of tourists to the island. They make continuous runs from 9:00 a.m. to 10:00 p.m. daily. 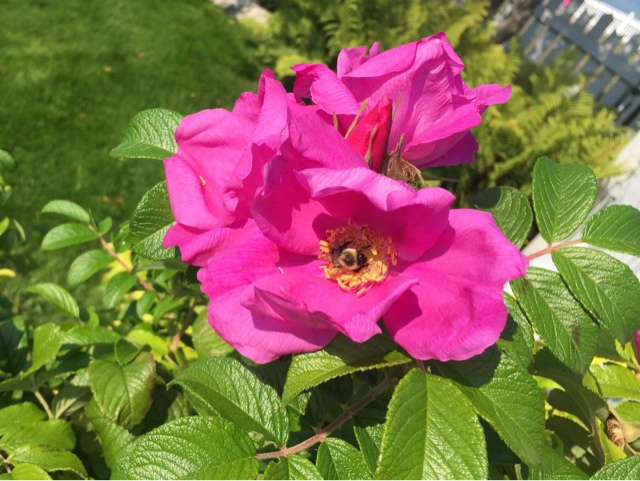 These wild roses grabbed my attention with their fragrant perfume. The bees must have been enjoying them too, because they were flitting about among the many blossoms. 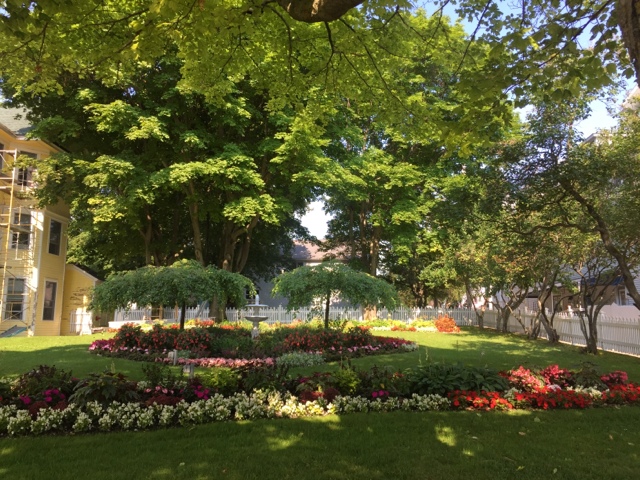 Well manicured gardens are scattered throughout the commercial and residential areas. There is no shortage of "oohs", and "ahhs" at every turn. 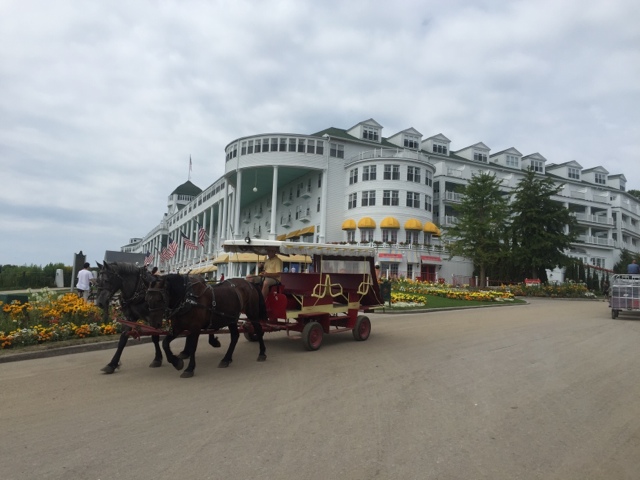 The Grand Hotel sits on the hillside overlooking the Straits of Mackinac. It opened its doors in 1887, providing a place of classic elegance for its many famous, and not so famous guests. This majestic structure boasts the worlds longest veranda for its many visitors to enjoy. 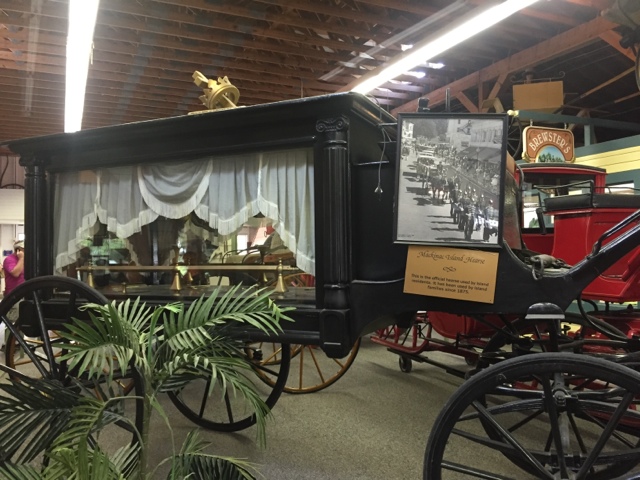 Since automobiles have never been allowed to travel the streets of Mackinac Island, a wide variety of carriages are a significant part of the islands history. The Grand Hotel has maintained a large carriage house where all sorts of horse drawn conveyances can be viewed. Jess read every single word that was written about each carriage, while I have to admit I got to the point where all I looked for was who the original owners were. It was a fascinating record of who's who in the early 1900's. 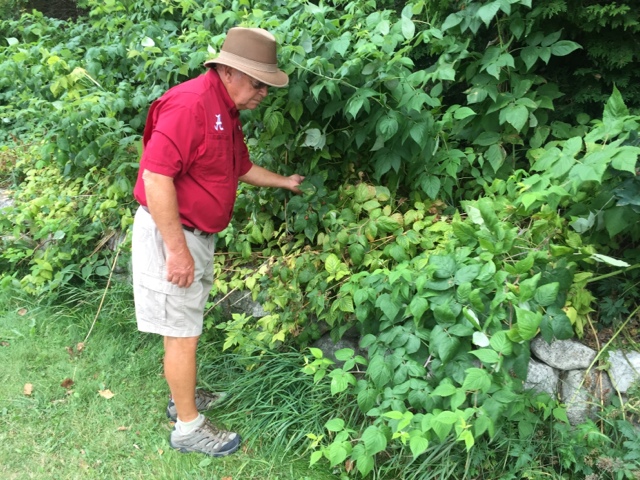 No matter where we walk, Jess always seems to find a few berries. This time he spotted a cluster of raspberries that he just had to sample. 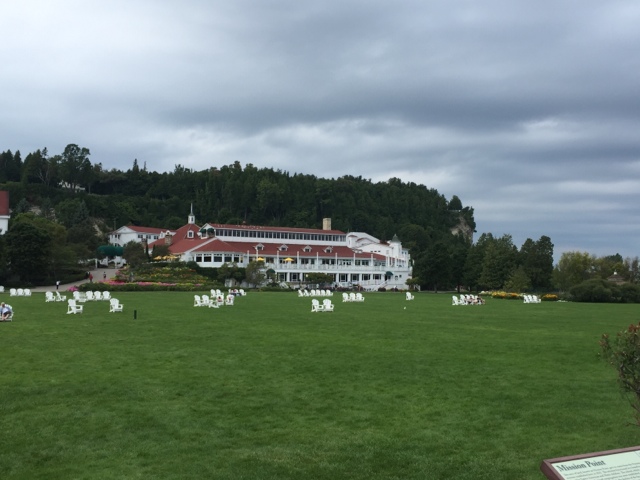 Mission Point has been home to a number of different occupants since it was originally settled in the 1820's by Reverend William Ferry, who constructed a school for the native population. Over the years structures were added by an assortment of groups. In 1966 it became the campus for a short lived college, before it was sold to evangelist Rex Humbard. By 1972 it saw its latest transformation into what is now The Mission Point Resort. The massive lawns allow visitors to enjoy a relaxed view of Lake Huron from the comfort of an iconic Adirondack chair. 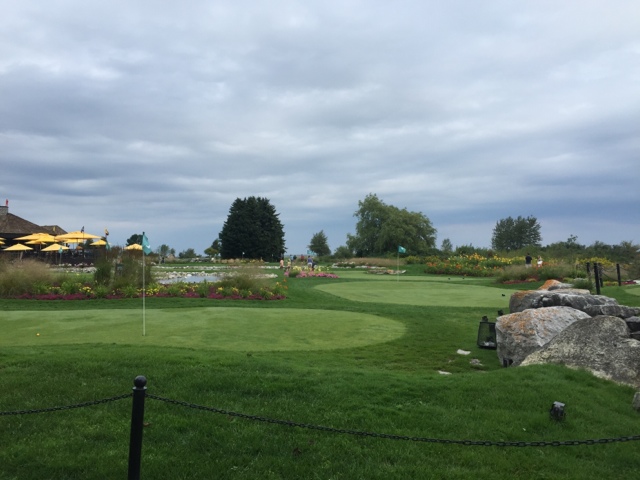 This is definitely the most beautiful putt putt coarse I have ever seen. 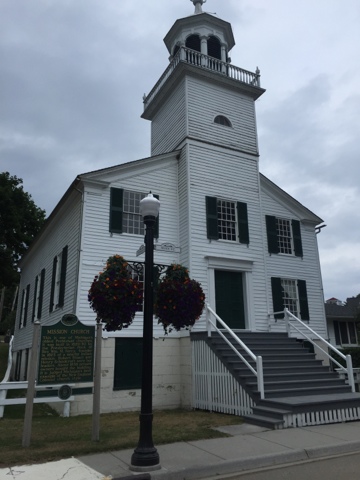 This is one of Michigan's oldest protestant churches. It was built in 1829-30 by members of Reverend William Ferry's congregation. It is judged to be Michigan's best example of the New England Colonial style church. 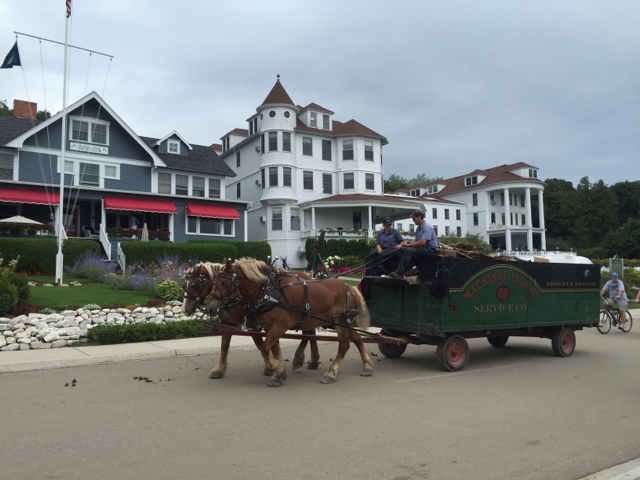 Couldn't pass up this photo op! Yes, even the garbage man has to handle a team of horses. 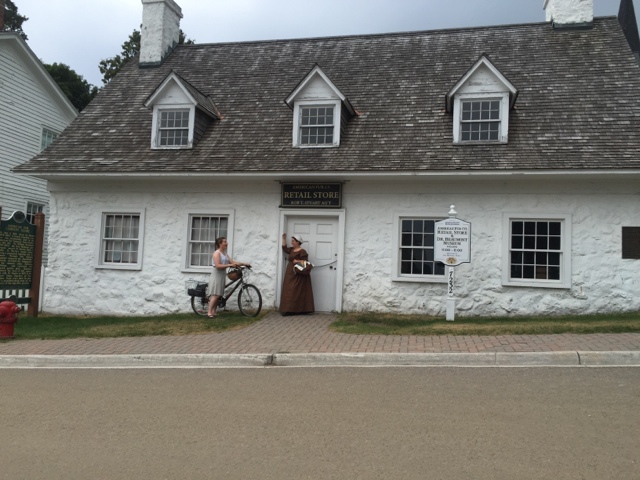 This historic building was once home to the American Fur Co. in the early 1800's. Notice that the tour guides all dress in period clothing. 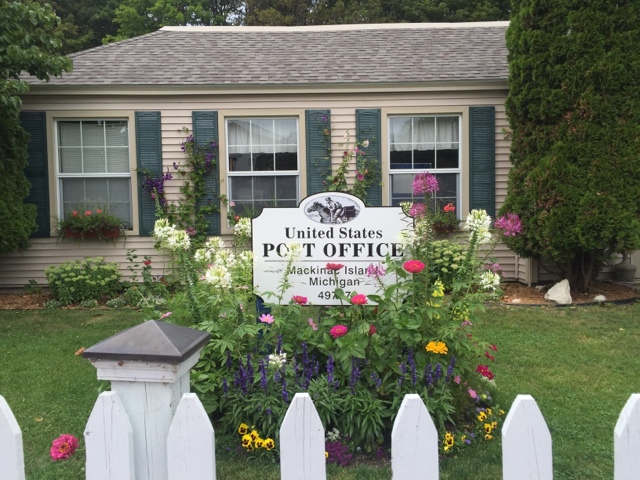 Even the post office on Mackinac Island has a claim to fame. It is the only post office in the U.S. that has never delivered a single piece of mail, at least that is what our tour guide told us. Everyone on the island must come to the post office to pick up their mail. 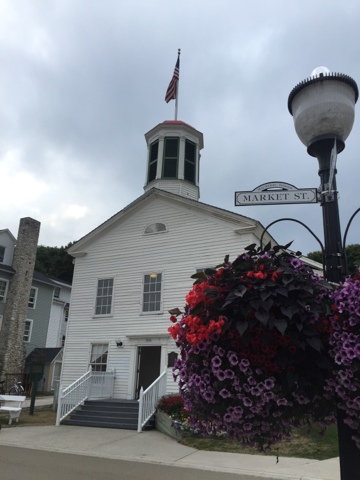 Yes, even Mackinac Island must have a police force. This historic building is home to a year round force that must patrol mostly by bicycle. 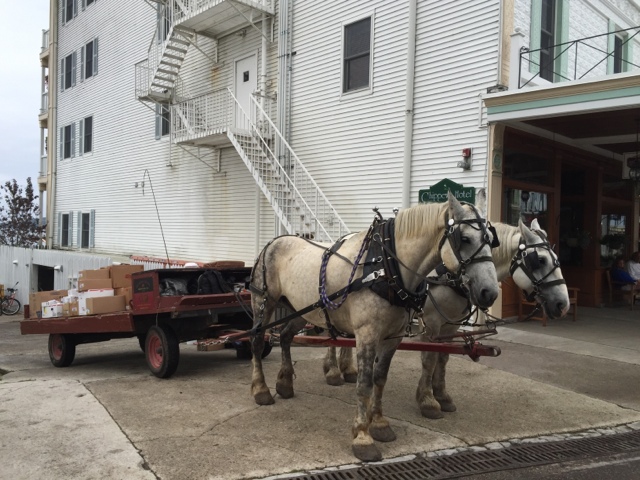 Most of the horses who work here are raised and trained by the Amish. They spend their summers on the island, and then most of them return to the mainland for the winter. 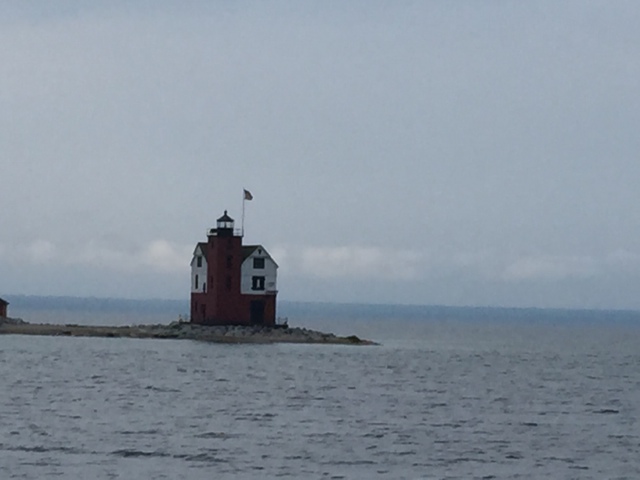 It is time to return to the real world. Our visit back in time was fabulous, but it really is time to set our sights southward. This lighthouse on the point of Round Island guides us into the waters of Lake Michigan, as we head for Chicago. 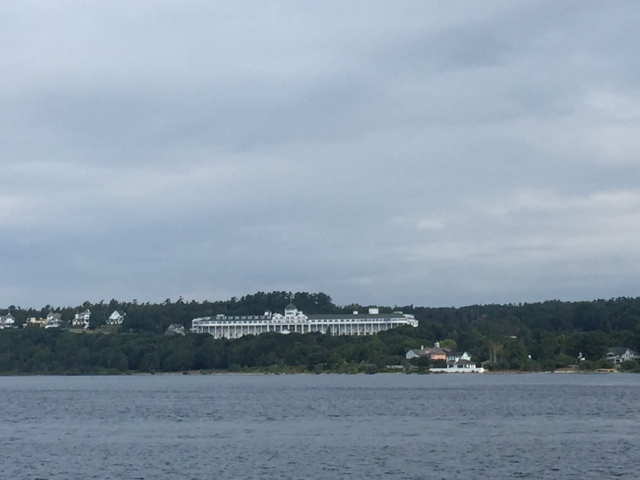 The vastness of The Grand Hotel is quite a sight from the water. 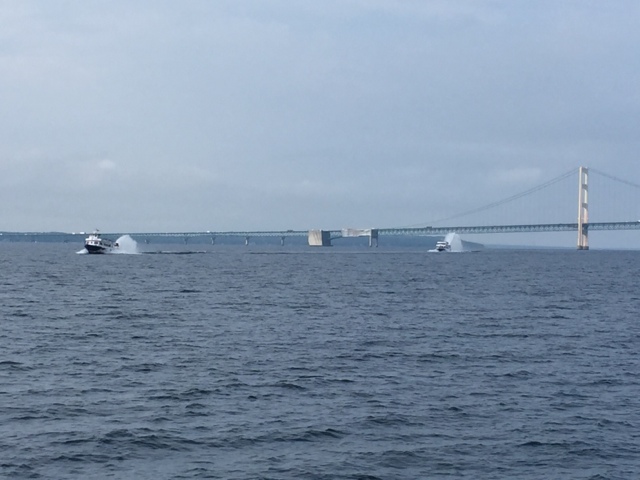 Two tour boats send out their rooster tails, as they speed more visitors to Mackinac Island. 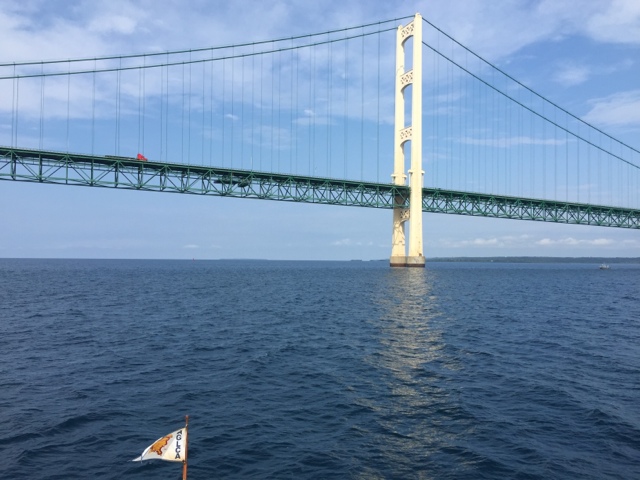 Cruising under the Mackinac Bridge that connects the Upper and Lower peninsulas of Michigan. The bridge was the world's longest suspension bridge between anchorages at the time it opened in 1957. It is still the longest suspension bridge with two towers between anchorages in the Western Hemisphere. The long leadups to the anchorages makes its total shoreline-to-shoreline length 5 miles. A quite impressive tribute to American engineering.
Posted by Linda and Jesse at 6:48 PM