Cruising down the Illinois River

Sept. 14-20
Days 307-313
Wind, wind, wind, and more wind! We really did not think we would still be dealing with wind after we returned to the river systems. Wrong! At least the body of water is narrow, so the waves don't have enough room to build too high. It just seems to blow straight at us with enough force to make for an uncomfortable ride. After a few days it did finally calm down, so that we could enjoy some nice days on the river. We were thrilled to see so many bald eagles soaring from the tree tops and down to the banks as they searched for their fish dinners. One evening we spotted a coyote rambling along the river bank, and of course we were happy to see all of the turtles sunning themselves. It makes us feel like we are getting closer to our home waters, where every log is covered up with turtles basking in the sun. 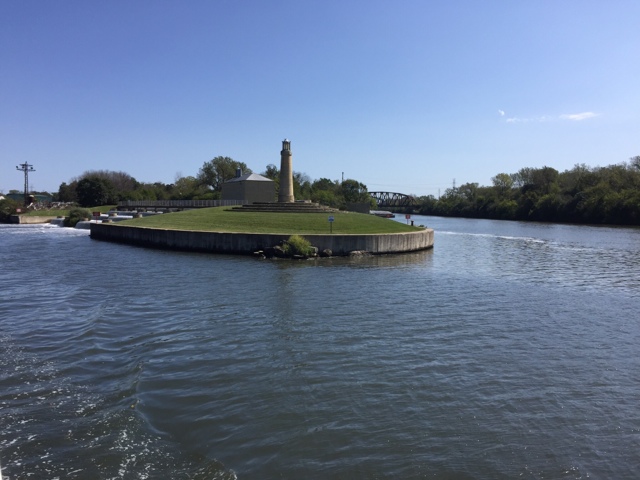 This is the point where the Calumet Sag Canal flows into the Chicago Sanitary and Ship Canal on there way to join all of the streams that merge to become the Illinois River. 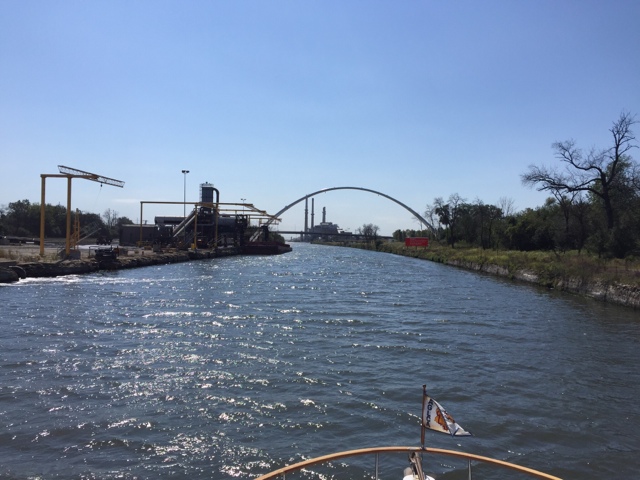 This is one of those spots on the Loop that causes just a little anxiety of the unknown for cruisers. The red sign reads: Danger! Entering Electric Fish Barriers/High Risk of Electric Shock/No Swimming, Diving, Fishing, or Mooring. This barrier is in place to try to stop the advancement of the Asian Carp into the Great Lakes. We had been warned that the large carp would be jumping out of the water in huge numbers and actually landing in our boat. I have mixed emotions about what we actually witnessed all the way down the Illinois. We saw very few carp, which was a little disappointing, but hopefully that means that the efforts to control this invasive species are working. 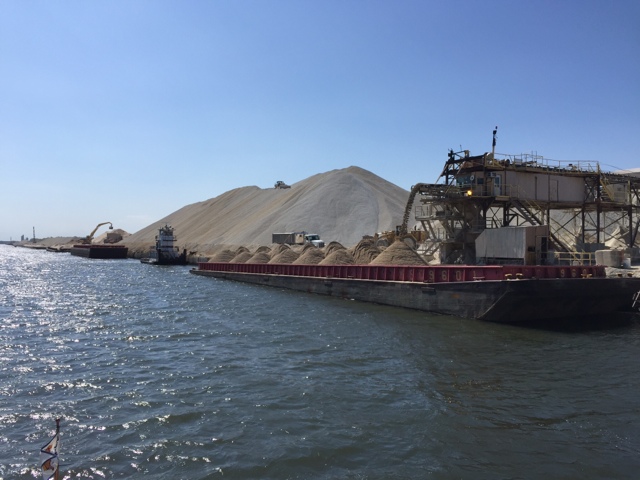 Barges load and unload their huge cargoes all along the river. Luckily the river has plenty of room for all of us. While we have had to stay prepared to contact the tow captains for their choice of a pass on the ones or twos, their left or right, we manage to stay out of their way quite easily. 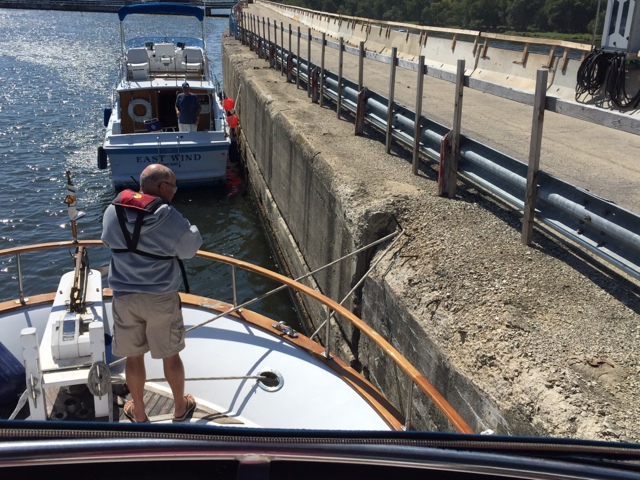 Yes, with the relatively calm waters of the rivers comes the need to lock through the many dams along the way. Unfortunately for pleasure craft, barges have first priority to the locks, causing for some delays along the way. We don't mind waiting a couple of hours, but it sure would be nice if the walls they expected us to tie up to were in a little better condition. Tying to a piece of rebar sticking out of a crumbling wall was quite interesting. Usually we just dropped anchor and chilled if the wait was going to be lengthy. 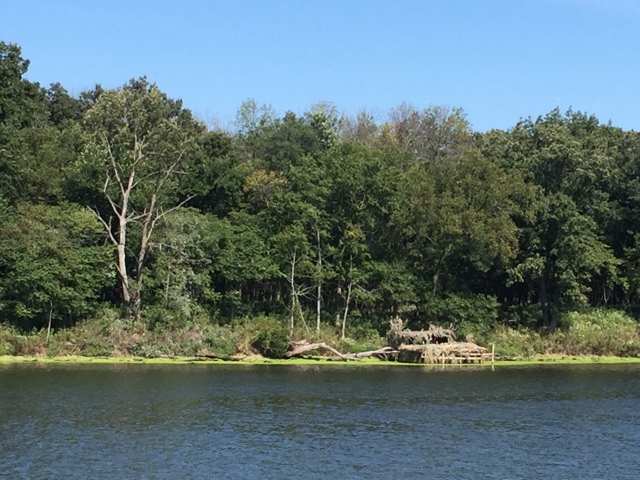 Duck hunting must be pretty good along this stretch of the river. We passed some rather large blinds in various stages of preparation for the upcoming season. 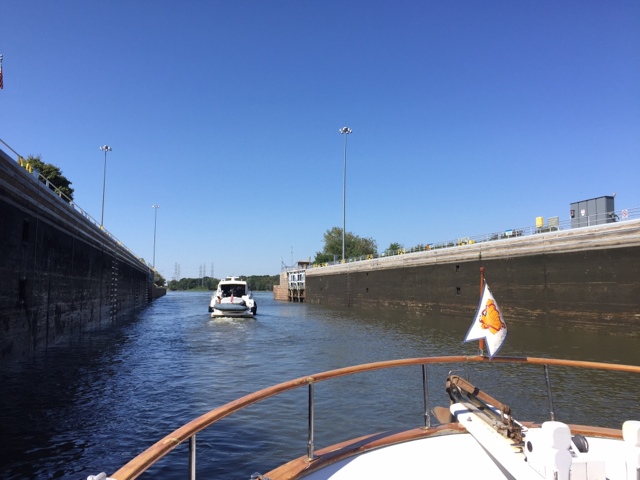 Locks on the Illinois have very few bollards to catch. Most of the time we all had to pull up to the same wall where the lock crew would drop us lines to hold bow and stern. The locks are designed to accommodate barge traffic that pretty much fill the lock wall to wall. Many times the barges have to be broken down into smaller units, in order to get them through the locks. Depending on how many barges the tow is pushing it can take several hours for one barge to get all the way through the lock. Thus the reason for delays for pleasure craft. 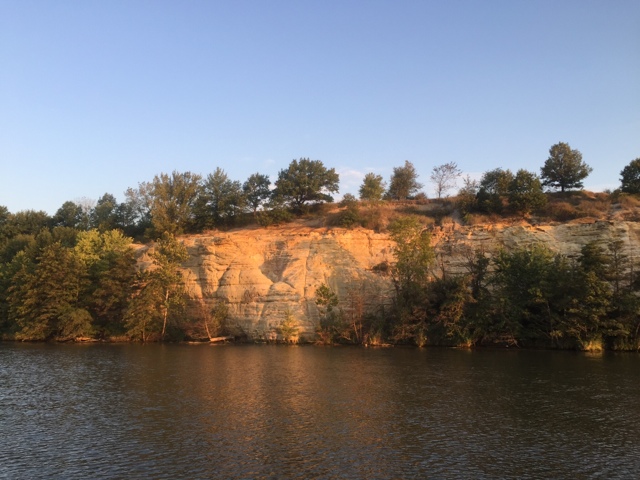 Some nights we were able to take advantage of city walls for tying up, other nights we anchored. This beautiful bluff at Buffalo Rock Park was shinning brightly with the morning sun, as we pulled anchor  for another day on the river. 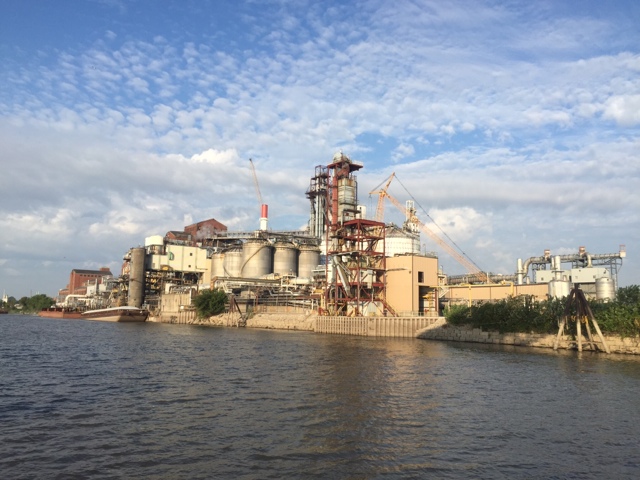 A grain handling facility loading barges as we passed by. While we can't necessarily see all of the farming that takes place along the river, it is there and the river provides excellent opportunities for handling the grain that they produce. 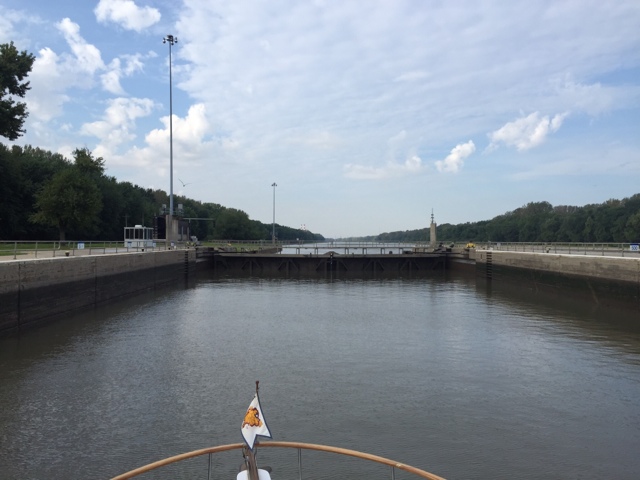 This lock through was a first for us. The drop here is only about 11 feet, and with basically calm waters we were given the option of floating through. It was kind of cool to just sit in the middle of the lock as the water receded. Of course that was my point of view, Jess was the one keeping Bama Dream where she belonged. He has become such a pro at maneuvering her that I have no worries. 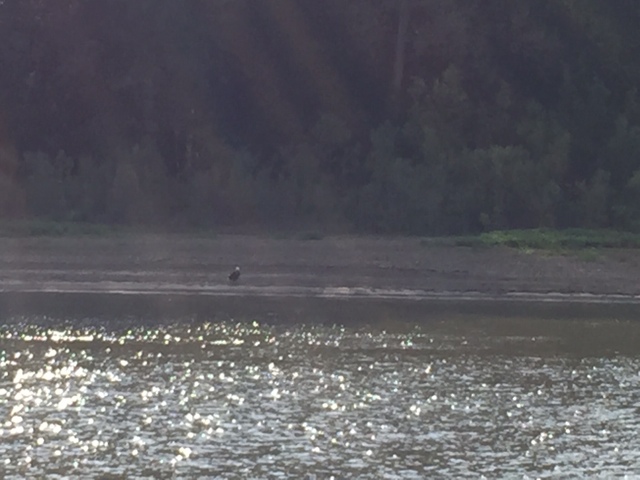 This eagle searching the river bank, is just one of the many we enjoyed seeing every day. 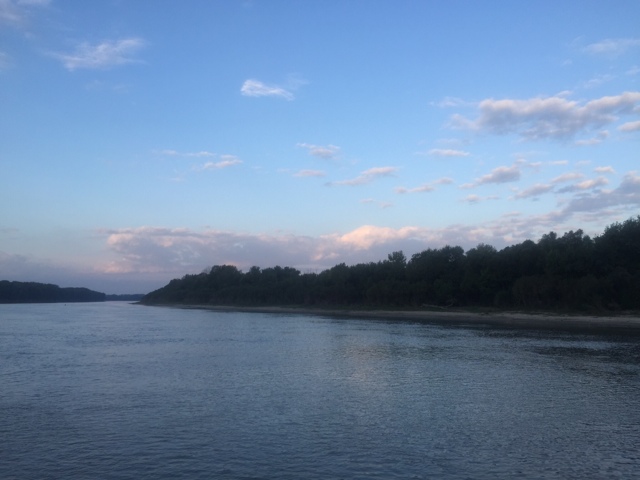 We are up and moving down the river by sunrise, as we prepare to put in a long day, in order to get to the marina in Grafton to watch some Saturday football. 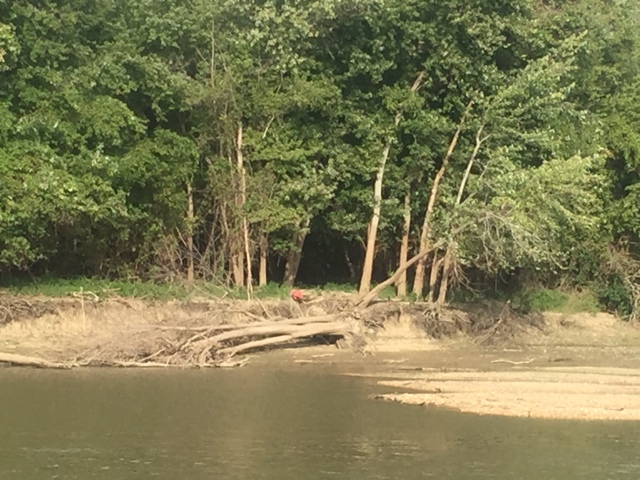 It is not hard to judge where the high water mark was this year. The banks are cluttered with downed trees, and if you look closely you will see the red buoy that once marked the right side of the river channel. The water level is low right now, with very few snags for us to avoid. 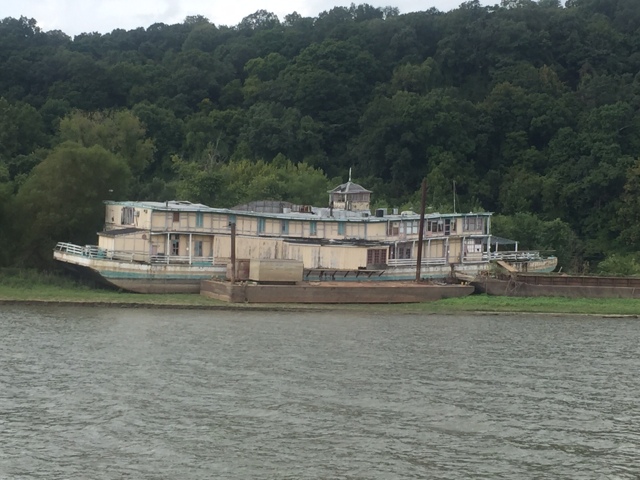 This riverboat is high and dry. Obviously, it has been quite some time since she plied these waters. 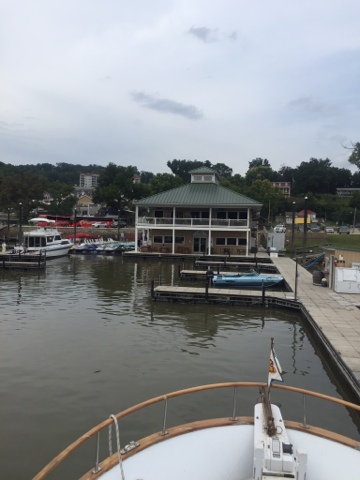 After a long day, we finally arrived at Grafton Marina, just north of St. Louis. We will spend the weekend here while we wait for an opening Monday night at Hoppies. There are very few places to safely anchor along the banks of the Mississippi River, so just about everyone cruising this section of the river must make a stop at Hoppies Marina. 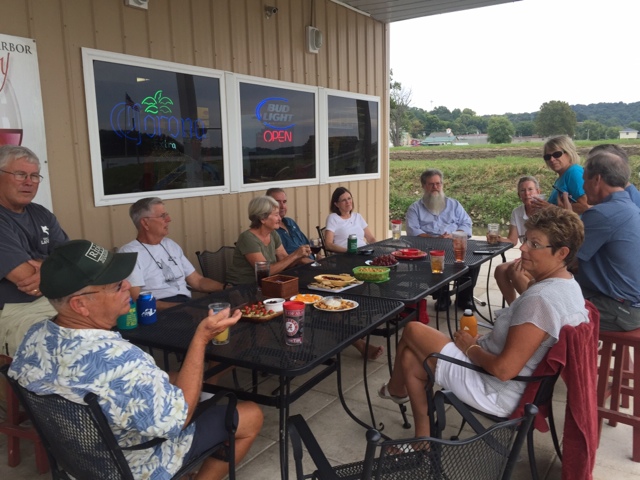 Time for docktails once again. We had a large group of Loopers docked here in Grafton. It seems really strange to be the ones with the most Looping experience, but other than Patriot and Always Home, whom we have met at other stops along the way, the other boats were just getting started. 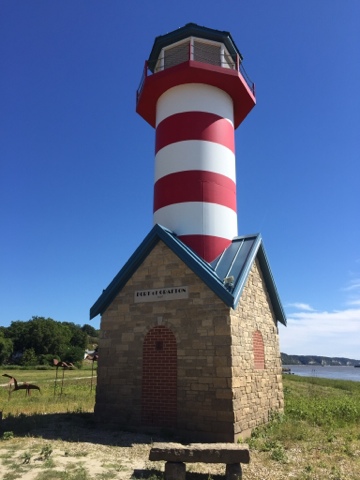 The lighthouse was erected in 2007 to celebrate the resilience and determination of the residents of Grafton. The Great Flood of 1993 devastated the town when flood waters reached a record high of 38.17 feet. 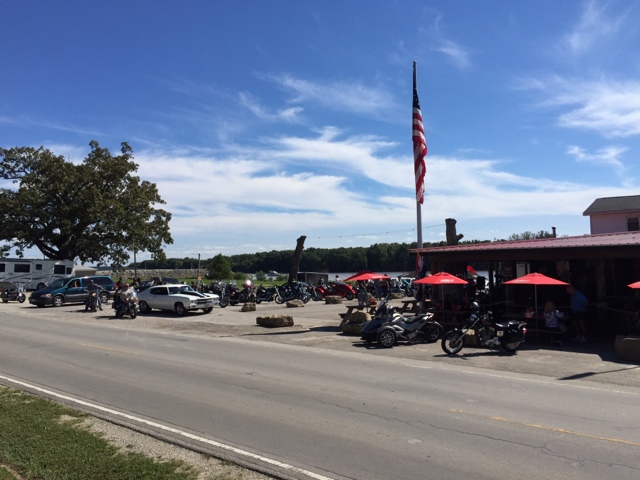 The sun is shining brightly this weekend, and it seems that all the bikers within a few hundred miles have hit the road for a trip to Grafton before cold weather gets here. The Hawg Pit Bar-B-Que restaurant is a favorite stop for lunch and some liquid refreshment before they move on. 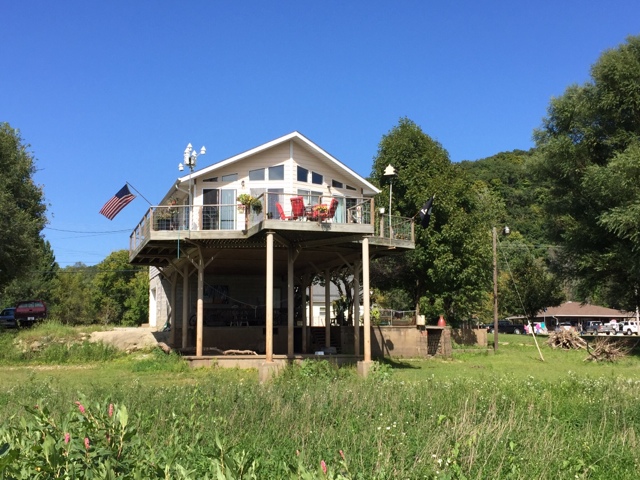 All of the structures along the waterfront are built on tall pillars so that they will be ready for the next big flood. I don't know how much flooding is considered normal, but the bike path along the river was covered with dirt, indicating that at some point this year the water had been at least that high.
On a perfect fall day of sunshine and mild temperatures, Jess had time to clean the outside of the boat, while I got real friendly with my IPad. Then we still had time to go for a nice walk, eat some supper, and have a great visit with Dan and Angie from Sea Horse before we prepare to take on the Mississippi River tomorrow.
Posted by Linda and Jesse at 2:45 PM