Moving North on the AICW

April 23-30
Days 163-170
After spending the past 5 months in Florida (counting the side trip to the Bahamas) it is finally time to leave this beautiful state behind us. The scenery changes rapidly as we move into the sawgrass country of Georgia and South Carolina. It is certainly interesting, even though it can become rather boring after miles and miles of grassland. Everything was going great until we developed a problem with our starboard engine and a horrible racket started coming from the area of our port engine. Not good! Jess finally tracked down the second problem as nothing to do with the engine (thank goodness). Somewhere in our travels we had evidently connected with a crab pot (really!) and the line had tangled in our cutter on the port shaft. With some time in the water he was able to get most of the line loose and the problem corrected itself. The starboard issue was a little more stressful. It actually died on us while we were dropping anchor and would not crank the next morning. Time to creep into a marina to hopefully get us back up and running under full power. Of course the wind was blowing ninety to nothing as we headed to Brunswick and St. Andrew's inlet was raging. We puttered along on one engine, and while we were a little uncomfortable, we made it to safe harbor with no problems. The best part of the day turned out to be seeing a ray leap out of the water twice right in front of us. It is an awesome sight that we have been lucky enough to witness twice so far on this adventure.  It was also great to see Roger and Mary on TaTa for a few minutes when we arrived at the marina. They were on their way north and hung around just long enough to help with our lines and say hello. Just like so many other times on this journey, we soon met new friends, Terry and Donna on their Albin 36, Meridian. Terry came right over to help Jess diagnose our engine problems and between these two brilliant minds, and a substantial amount of trial and error, our starboard engine was back in running order.  Serenity and Mara Belle, whom we had last seen at the Rendezvous were also here, so we enjoyed catching up with them at docktails. As our goal was to catch up to TaTa as quickly as possible, we put in a couple of long days in order to meet them on anchor at Hilton Head. A nice walk and a stop for Happy Hour left us with enough time for a nice game of Euchre.  Our short break must have been good for Mary and I, because for the first time we won back to back matches! It was nice to  visit with Roger and Mary again even if it was only for a few days. Hopefully someday we will make it to  British Columbia to see their beautiful province. 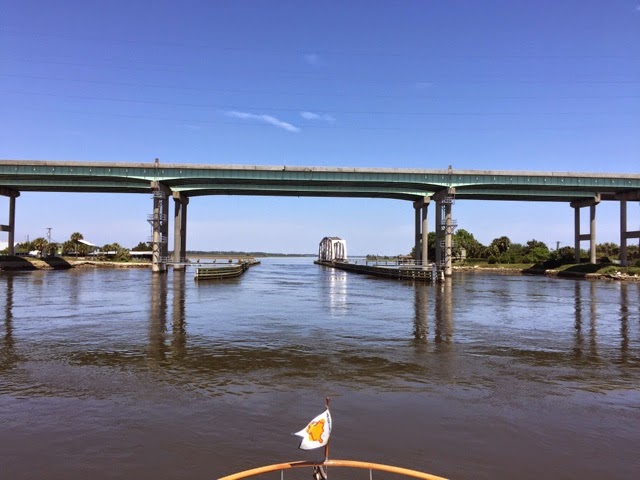 Back in the ICW headed north. Luckily for us most of the bridges we have to negotiate have enough clearance for us to slip under.  Many of the railroad bridges are left open, as this one is, unless there is a train on its way. 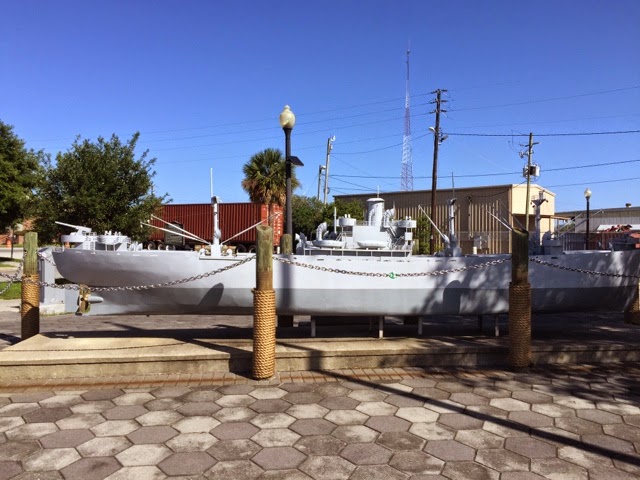 After spending a few hours struggling with the engine (and having no luck), Jess decided it was time to take a break. We enjoyed a walk around the historical area of Brunswick. This is one of the most unique war memorials we have run across in out travels. 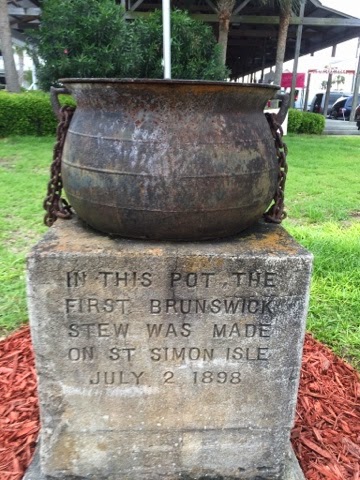 Shows how smart I am. I had never connected brunswick stew with the town of Brunswick, GA.
Unfortunately the pot was empty. We did enjoy a very nice meal with Terry and Donna at Indigo Coastal Shanty on Saturday night. 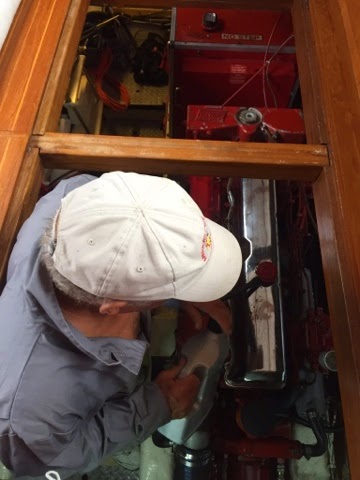 After resting on the problem Friday night and a quick trip to West Marine on Saturday morning, my mechanic (thank goodness), is back in the engine room.  A few hours later, with a minimal amount of frustration and the engine is once again humming. No big deal! 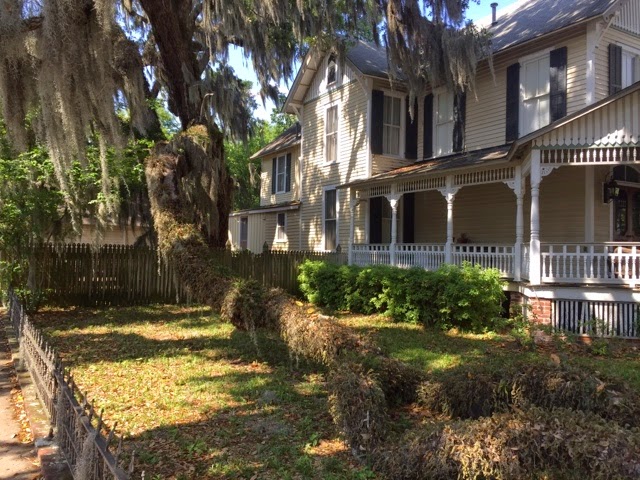 The old homes are beautiful, but the trees are absolutely breathtaking!  The huge old oak trees that shade the streets are amazing. Thank goodness Asplundh hasn't been here! 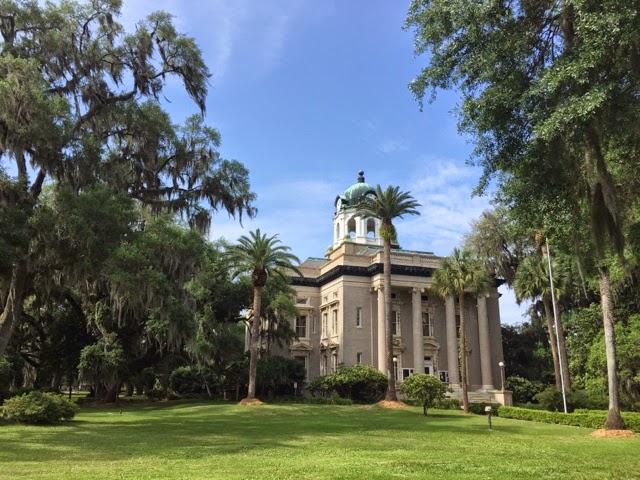 The grounds that surround the old courthouse are groomed to perfection. This is what the old south looked like, at least as I think of it. 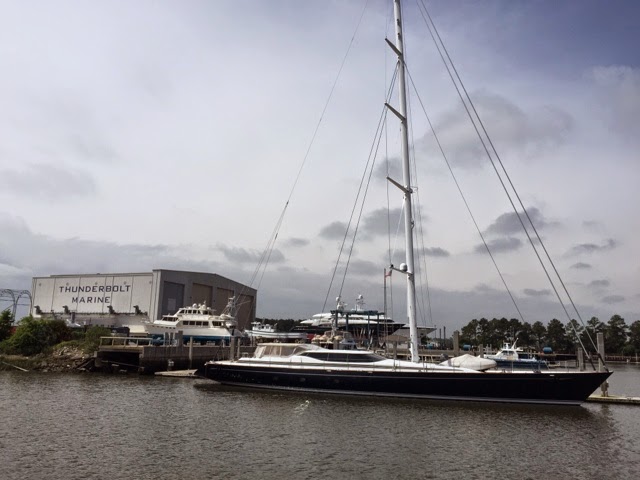 There seems to be no limit to the design of stunning sailing ships.  This gorgeous lady was waiting for the finishing touch just north of Savannah. 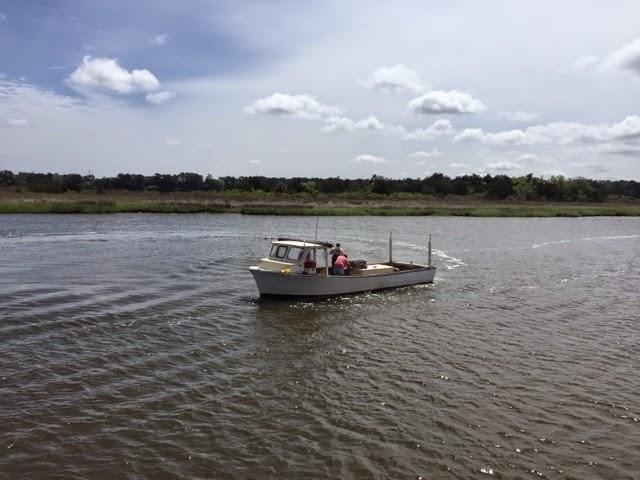 We never seem to leave crab pots far behind us in our travels. It has just become part of our navigation strategies. Traveling the ICW is a little easier than open water, because they are usually placed just outside of the channel. 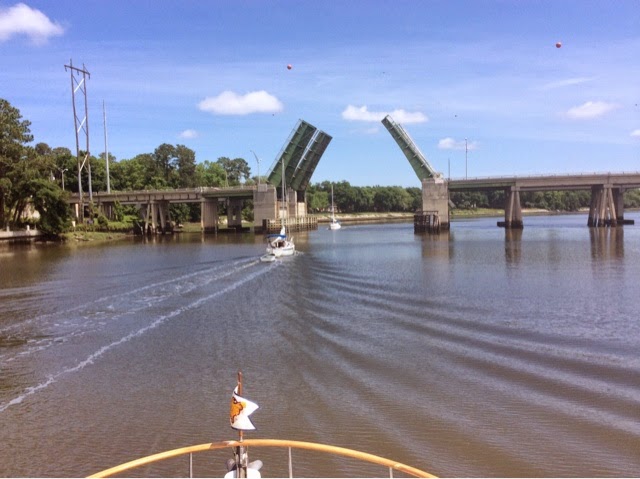 Even though the Sam Varnedog Bascule bridge would have had enough clearance for Bama Dream, it had to be opened for the sailboats ahead of us. 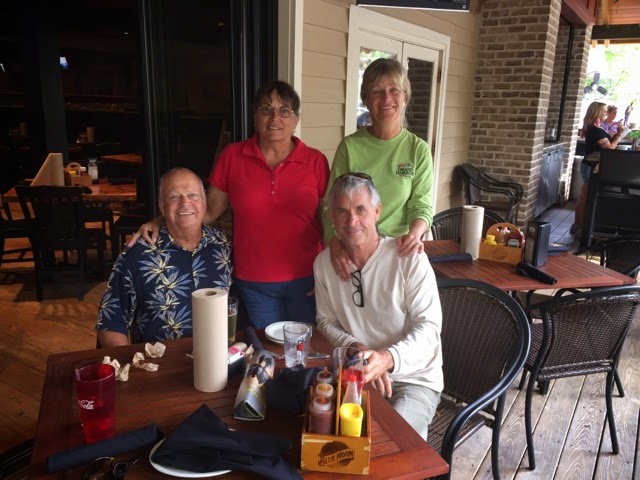 Finally back with our traveling buddies, Roger and Mary on TaTa. We anchored in the harbor at Hilton Head. Then we stretched our legs with a nice walk and found the perfect spot to enjoy Happy Hour. Had a great evening catching up on cruising stories and beating the guys 2 out of 3 at Euchre. 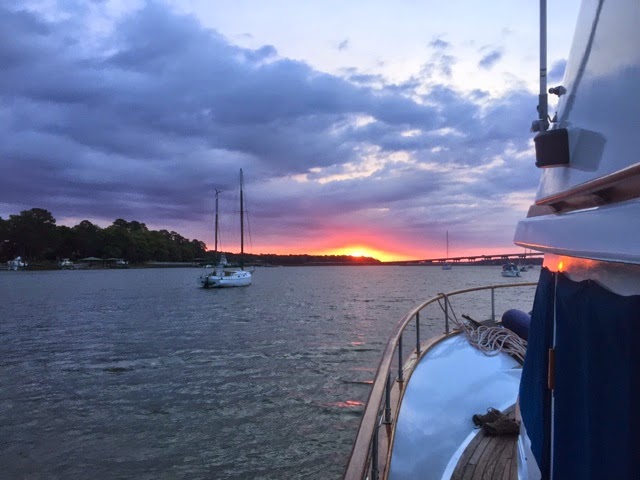 Sunrise means it is time to pull anchor and continue our journey north. Dolphins greeted us as they swam by our boat in their search for breakfast. Our next stop, Beaufort, SC. 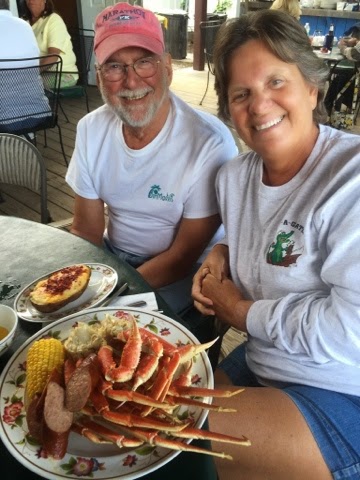 If you are ever in Beaufort, make sure you find a place called The Fillin' Station. We were fortunate to be here on a Tuesday night when they serve crab legs for $12.00. They do have a very limited menu, one item each evening, Tuesday through Friday. Don't go there if you are in a hurry. Plan on at least two hours, but with a few drinks and wonderful friends to share stories with, who is in a hurry anyway? Terry and Donna pulled into Lady's Island Marina as we were headed for shore and they invited us to join them. 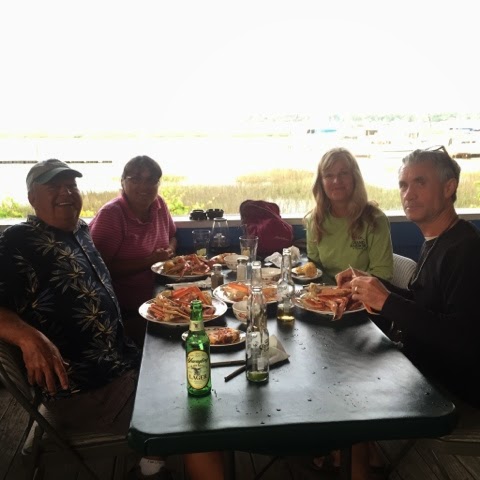 I think Jess has found his new favorite place. Roger and Mary joined us after they had made a quick tour of the historical area of Beaufort. What a wonderful evening! 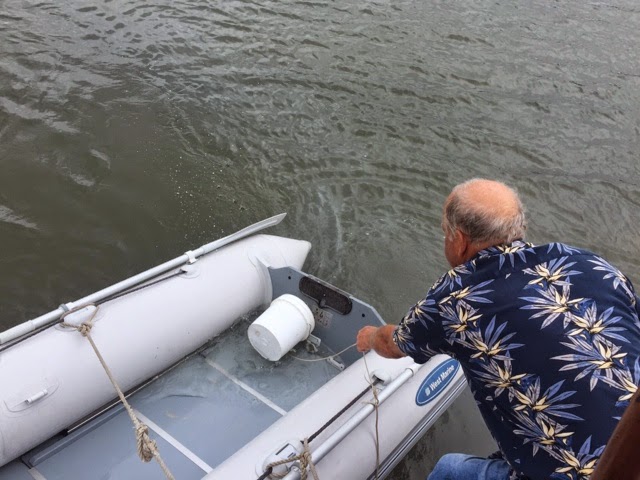 Time to put the dinghy up in preparation of a long Dayan the water.  We have experienced quite a bit of rain lately, so before we could lift her, Jess had to do a little bailing. We had planned to spend our day touring Beaufort, but the weather prediction was not favorable, so we decided to continue north. 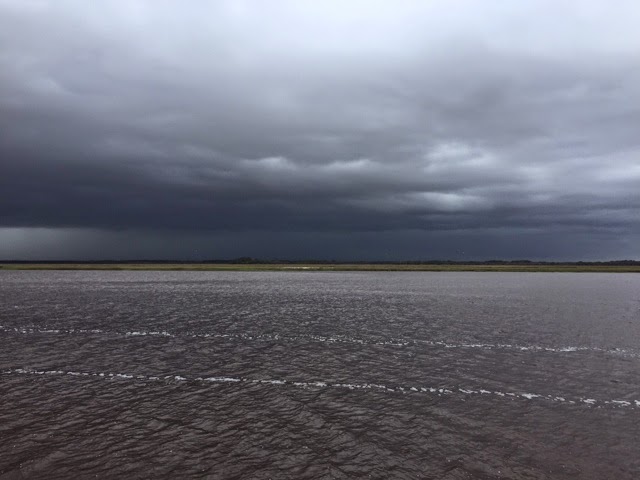 The black clouds threatened most of the day. For a short time they did a sight more than threaten, but we persevered and finally put in at a nice anchorage in Church Creek. Around rain storms Jess managed to cook us a great meal and Mary and I won two more games of Euchre. We are on a roll. 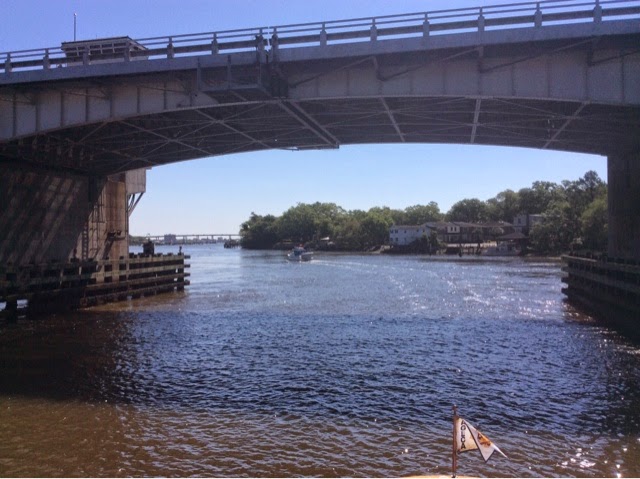 The current was strong in the cut as we were coming into Charleston. Luckily it was going our way. We saw speeds of 11mph! Wow, hold onto your hat! 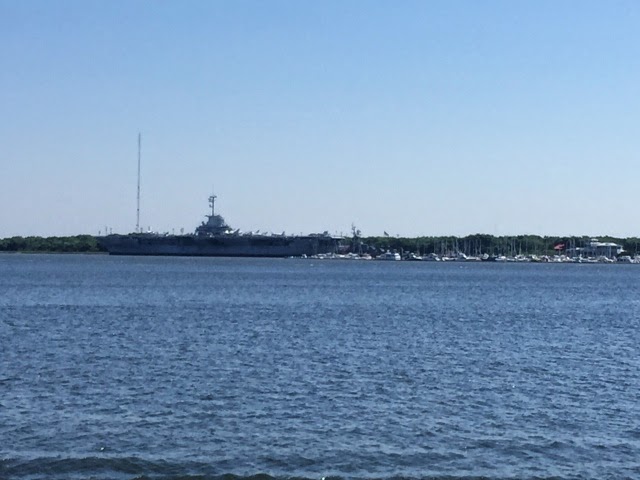 The aircraft carrier USS Yorktown is docked in the harbor here for visitors to tour. We saw more commercial traffic here than any of the other ports we have visited. Our choice of marinas was fantastic for our short stay, because of its proximity to downtown Charleston. Can't say that it was the best choice for ease of docking though. We stayed at Charleston Maritime Marina which is great except for the strong current getting in and out of the docks. The story of leaving here will wait for another time. 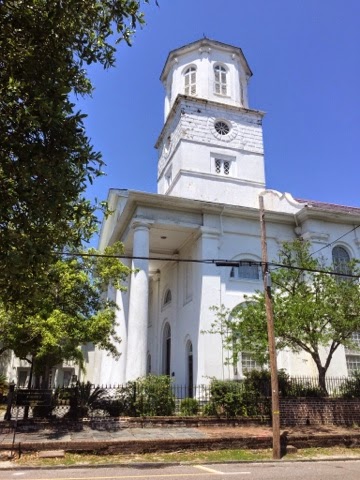 The Second Presbyterian Church founded in 1809. This is just one of the many stately structures we found as we enjoyed walking around Charleston. 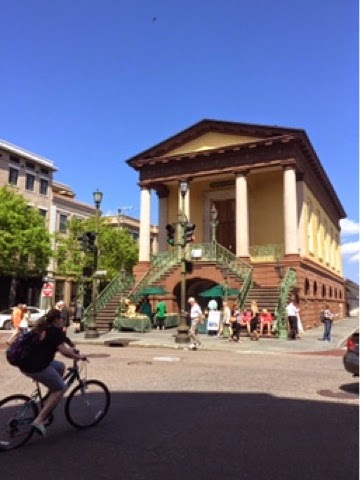 Charleston City Market provides the perfect spot for local artisans to sell their creations. Making baskets out of seagrass is a craft that has been kept alive by local craftsmen. We also found dried okra that is absolutely amazing! Wish I knew where to get more. 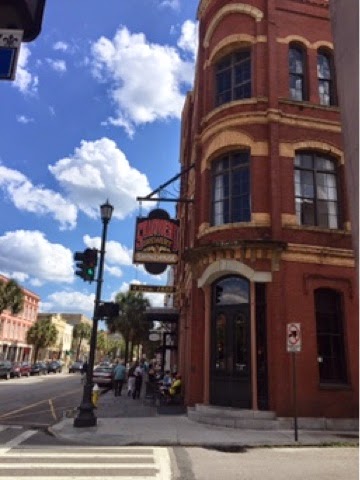 Time for a short break to rehydrate. Southern Brewery & Smokehouse provided us with a nice snack and a drink as we sat outside tourist watching. 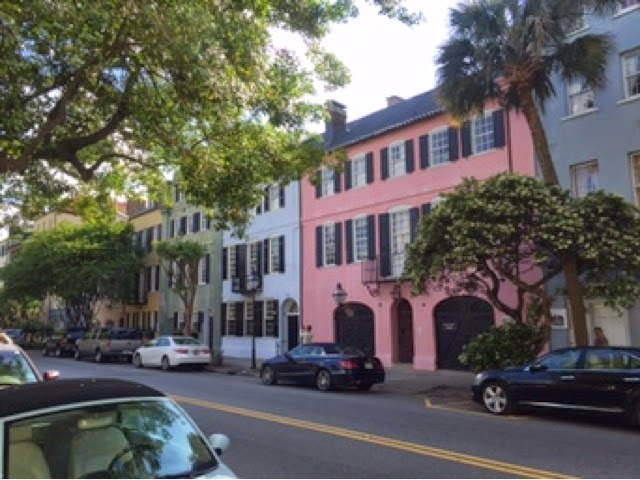 Rainbow Row is a famous spot on the tour of Charleston. Very pretty street close to the waterfront. 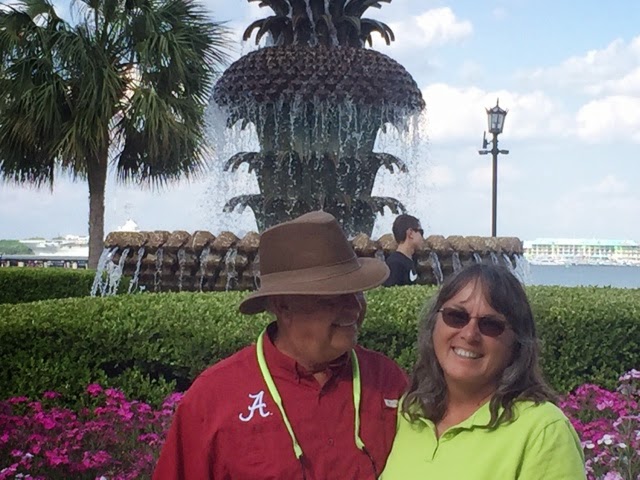 Jess was not behaving while we were trying to get this shot by the fountain on the waterfront.
Need somebody good with photoshop to take out the guy walking by behind us. Oh well, the day was fantastic and the fountain was beautiful. 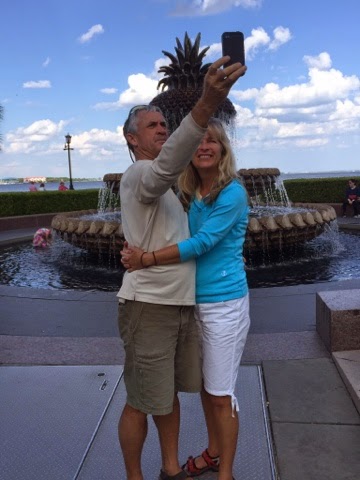 Roger and Mary do better with selfies than we do. Neither Jess nor my arms are long enough to get the camera far enough away from our faces. 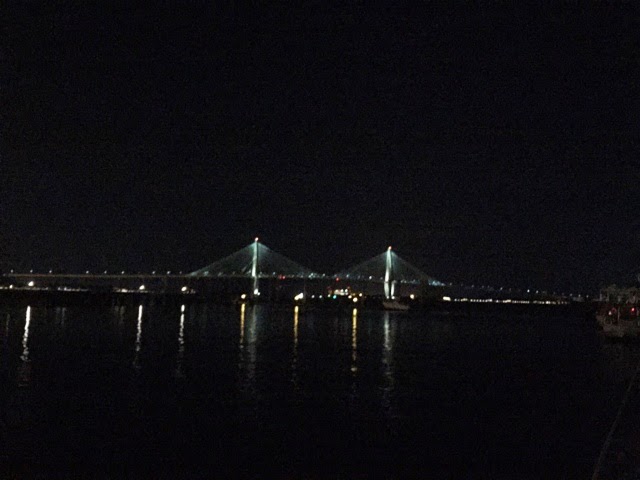 One more night and it is time to say good-bye to Roger and Mary again. They will finish the loop when they get back to Canada so they are not in any hurry to head north. We still have a long way to go!
Posted by Linda and Jesse at 8:13 AM